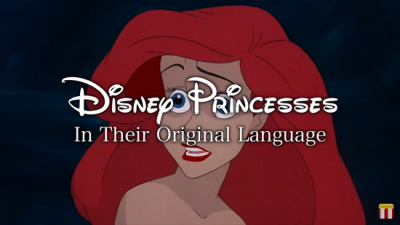 Watching Disney movies when I was younger always left me with the impression that every character was English because, well, they spoke English. It wasn’t until later in life that I realized not just Disney movies, but every movie, is actually telling a story about a specific time and place and that these stories didn’t have to take place in an English speaking country. I would contemplate this for a while before the thought fell to the wayside, but every once in a while I see or hear something that brings the thought back to the forefront like watching a foreign film or strolling around Epcot and seeing the character meet and greets in their country of origin.

Recently I stumbled on a couple videos that show Disney princesses singing in their native tongue. You might have already see it as it’s been making the rounds, but if you haven’t take a couple minutes to watch them, it might make you appreciate some of the subtleties Disney interjects when making their movies, even if most of the audience won’t.

Sometimes it gets difficult to pin the country of origin to a movie especially since almost every mainstream movie (at least in America) has the actors speaking English. Take a random movie; let’s use Zach Snyder’s 300, the movie based on a comic book, based on a dramatized version of the Battle of Thermopylae. With the plot, the action, and characters speaking English, is it no surprise that at some point during the movie people might not recognize that it’s based on an event in Greek history. Let’s take another movie, Snow White. Most of the movie takes place in a forest and could have called almost anywhere home.

It’s only when we realize where and when a movie takes place that we can start to pick up on subtleties and gain a greater appreciation for said film. One of the reasons Disney is so successful is because they not only provide bright, energetic animation for kids, but they provide a deeper subtext for adults and some of this subtext comes from the setting.

A Special thanks to Movie Munchies for creating these videos.