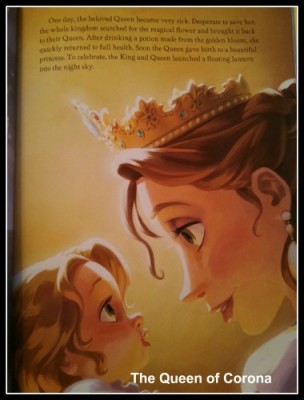 Unfortunately, not many Disney movies provide a mother for their central characters with most moms being tragically disposed of early on in the storyline.  However, mothers are easily some of the most loved characters in the world of Disney entertainment.  And why not?  Whether they are a part of the movie for only a few minutes or manage to escape their tragic demise, these mothers are cherished and credited with encouraging, guiding, teaching, and molding their children into those beloved characters which have spanned generations.

We have loved so many of these special women throughout the years for everything they represent – strength, courage, sacrifice, wisdom, and unconditional love – not only onscreen, but for the tribute they pay to the special real life moms in our own lives.

Here are some of my personal favorites:

The Queen of Corona – Princess Rapunzel’s Mother (Tangled). Although she never speaks in this movie, it is obvious that the Queen is not only very loving, but is also a much loved character.  After her infant daughter is taken from her, the Queen is devastated, but finds a way to move forward – every year on her daughter’s birthday, she and the King hold the lantern festival in which they lead the country in releasing floating lanterns in an attempt to call their daughter back home.  Each year, they are just as devastated as the day their baby was taken from them.

The Queen never lost hope that one day her daughter would return to her loving arms and that she would recuperate the child that Mother Gothel stole from her.  And, on Rapunzel’s eighteenth birthday, that hope was finally realized as her family was at long last reunited.  Hers is a character that radiates quiet strength and courage, a living hope that refuses to be extinguished and is a light for all mothers who may be going through a similar situation. 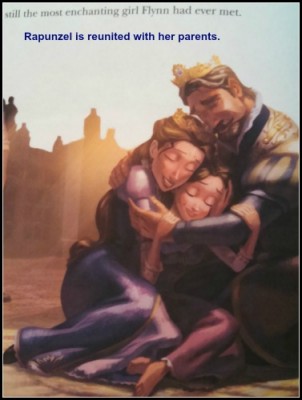 Eudora – Princess Tiana’s Mother (The Princess and the Frog). Like her husband, James, Eudora puts her family first and works hard as a seamstress to make ends meet.

After her husband is killed in war, Eudora shoulders the responsibility of bringing up their daughter alone, becoming Tiana’s confidante, worrying that her daughter works too hard, and hoping she will settle down.  But when Tiana shows no desire to do so and confides in her mother that her dream is to bring her father’s dream to life by owning her own restaurant, her mother puts her own wishes for her aside and prepares to help her daughter follow her dream.  Knowing how much it would mean to her, she gives Tiana her father’s old gumbo pot as a sign of confidence and encouragement.

As Tiana confronts her greatest challenges, she remembers her mother’s words that, although her father may not have made his dream of owning his own restaurant a reality, he had Tiana and her, and that was his greatest treasure and everything he needed.  That reminder eventually leads Tiana to make the right choice and save the day.  Despite not always agreeing with her daughter’s intentions, Eudora supported and helped her daughter while reminding her what is truly important in life. 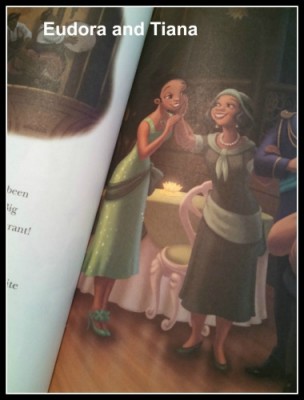 Mrs. Jumbo – Dumbo’s Mother (Dumbo). After an earlier visit from Mr. Stork which did not include a delivery for her, Mrs. Jumbo finally receives her bundle of joy a short time later. 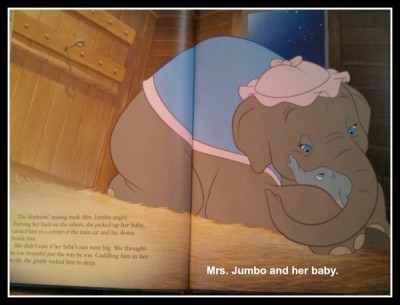 Her little bundle, which she names Jumbo Jr., is quickly discovered to be different from the other elephants when his overgrown ears are revealed.  This brings on relentless teasing to which Mrs. Jumbo fiercely responds by slapping one of the other elephants. Soon, the other elephants begin calling the little elephant Dumbo.  But, Mrs. Jumbo doesn’t care that Dumbo is different, and is very protective over her little one, eventually being thrown into solitary confinement after spanking one little boy who pulls Dumbo’s ears.

When Dumbo visits his mother and she caresses him through the chains and bars, it is a moment filled with tenderness and heartache, testament to a mother’s immense and protective love.  Eventually, Dumbo uses the love his mother gives him to change his weakness into strength and uses his ears to fly!  This brings him fame, and, in turn, his mother is released, and they are reunited.  Mrs. Dumbo was her son’s fierce protector and made him realize that his differences are not weaknesses – they are strengths! 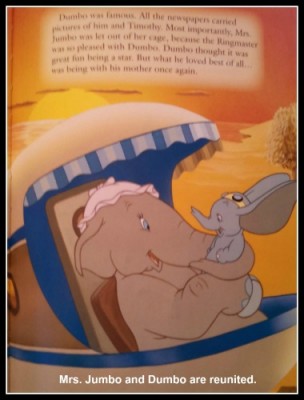 Kala – Tarzan’s Adoptive Mother (Tarzan). Kala is a gentle, loving, and kind gorilla, who’s infant son is killed by a leopard named Sabor.  When Kala finds Tarzan, an infant who’s parents have also been killed by Sabor, she cares for him as if he were her own son, despite the protests of Kerchak, her mate and the leader of the troop.  Kala is also very brave, fighting off Sabor in order to protect her new-found baby.  When Kerchak makes it known to Tarzan, as a young boy, that he will never be a part of the troop because he is not a gorilla, Kala consoles him and tells him that they are the same because their hearts are the same, inspiring Tarzan to become the best ape in the troop.

As an adult, Tarzan kills Sabor, then finds himself enamored of Jane, part of a group of humans who have come to the island.  He becomes angry with Kala for not telling him that there were other creatures who looked like him.  Kala takes him to the treehouse where she found him and gives him the picture of his parents telling him that she will always love him no matter where he goes.  At this, Tarzan tells her that she will always be his mother no matter where he is.

After he decides to go to London with Jane, Kala and the other gorillas are taken captive by a poacher, but Tarzan returns in time to save her and the other gorillas.  Sadly, Kerchak is killed by the poacher, but accepts Tarzan as his son right before he dies.  Kala is a strong and brave mother who reminds us that a child doesn’t need to be born to a woman in order to be loved as her own.  Kala’s character shows that all children need a mother’s love and protection.

Queen Elinor – Princess Merida’s Mother (Brave).  Queen Elinor is the queen of the Scottish kingdom of DunBroch, the wife of King Fergus, and the mother of Princess Merida, who is very independent, and triplet sons, Harris, Hubert, and Hamish, who constantly find trouble.  She is completely dedicated to her family and to schooling Merida on everything a princess is expected to be.  Although she only wants what is best for her daughter, her sternness toward Merida and expectations of perfection, not to mention her demand that Merida marry promptly, cause a strain in their relationship and ultimately lead Merida to a witch’s cottage where she obtains a spell to change her mother. 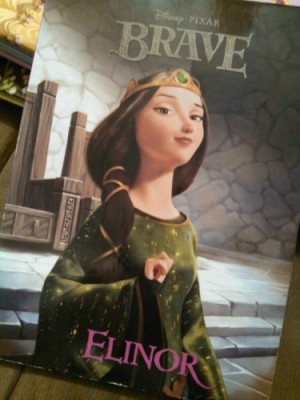 Unfortunately, the spell is not quite what she intended, and Queen Elinor is turned into a bear, hunted by her husband and the three clans who have come to DunBroch to compete for Merida’s hand in marriage.  In order to save her mother, Merida sneaks her out of the castle and out into the forest, hoping to get the witch to lift the spell, but the witch is gone, leaving behind a riddle – “Fate be changed look inside, mend the bond torn by pride”.

Confused, Merida tries to solve the riddle before time runs out while showing her mother how important her survival skills are – something Queen Elinor never gave her credit for in the past.  As the Queen sees how Merida’s skills are not as trivial as she once believed, she begins to change the way she relates to her daughter, surprising Merida with her willingness to let her choose her own fate and call off the competition for her daughter’s hand.

Ultimately, Queen Elinor becomes trapped by King Fergus and the clans, who don’t believe Merida when she tells them that the bear is actually her mother, and, as Merida fights her father in order to save her mother, Mor’du, a cursed prince who was turned into a bear and who had previously tried to kill Merida, suddenly appears, once again attacking Merida.  Queen Elinor confronts Mor’du, fighting him with all her might, a mother protecting her child, a fight to the death, until he’s finally crushed by a stone, releasing him from the curse.  Merida hugs her mother, apologizes for everything, and tells her that she loves her.  The spell is broken, and Queen Elinor returns to her human form.

From that moment on, the relationship between mother and daughter is changed, with the Queen accepting Merida for who she is, enjoying time with her daughter, and emerging as a less rigid person.  Queen Elinor embodies so much of motherhood – wanting the best for her child, sometimes going about it the wrong way, love, courage, fear, the ability to change, and so much more.  But the scene that stays with me, the one that had me clutching my daughter in the dark movie theater and brought tears to my eyes, was when she fought to the bitter end against Mor’du to save her daughter’s life.  That scene was the ultimate reality of a mother’s love for her child.  There is so much more that can be said about that, and yet…no more words are necessary. 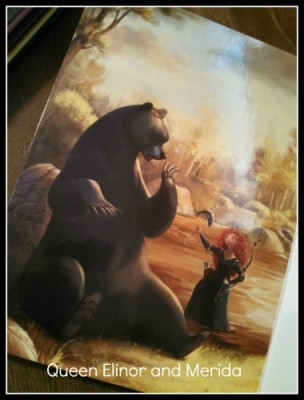 Just like real mothers, these Disney Moms make mistakes, have a change of heart, battle with themselves, inspire their children to succeed, impart wisdom, and have been responsible for their children’s triumphs.

Although Disney movies usually don’t give their main characters the benefit of a mother, every once in a while, they give us these jewels.  And aren’t we glad they do?…

Who is your favorite Disney Mom and why?