The Disney Dream has something totally new in the cruise industry—portholes in the inside staterooms!  This is a unique idea and one that is making these inside staterooms harder to get than those with the large picture window portholes or the verandahs.  This same feature will be on the Disney Fantasy when she comes out in 2012.

The staterooms are either standard (169 sq. ft.) or deluxe (204 sq. ft.).  The one main difference, and once you’ve had this you’ll not want to go back, is the deluxe stateroom has a split bathroom.  This extra space is well worth a little extra money and I find when I’m on a ship that doesn’t have one, I really miss it.  In one (little) room you have a sink and toilet and the other (also little) room is a sink and tub/shower.    Other than this, there’s no difference between the two types of inside staterooms.

They all have a queen bed and a sofa that converts into a bed, with some also having a pull-down upper berth making it a stateroom for four.   One difference in the other ships is that most of them have beds that can be split apart to make into twin beds but these don’t.  The bed is raised high enough to store your luggage or other larger items under the bed, which is a nice feature to get it out of the living space.  You also will have a vanity, hair dryer, mini-refrigerator, safe and iPod docking station.  There is a trunk with a lid that serves as a coffee table and doubles as storage as well.  This is all standard for the staterooms, but the fun part is the porthole.

The virtual porthole is actually real-time outdoor views!  The day I took pictures we were docked at Port Canaveral, which you’ll see in the photos, but when you’re cruising, you’ll actually see water—and possibly a few other surprises such as some of your favorite Disney characters, or maybe even a pirate ship!  Inside staterooms have always felt small but with this virtual porthole it just makes it feel a little bigger and not so closed in.  It’s also great to see what’s outside without going up on deck.  My main complaint of an inside stateroom was that I never knew if it was day or night, and this also solves that problem.  For those that don’t like it, or need it totally dark no matter what time of day, there’s a switch that turns off the porthole and puts you back in a regular, inside stateroom. 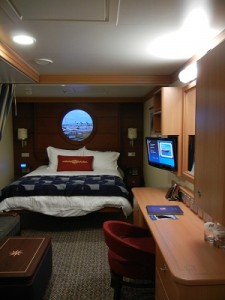 Disney continues to raise the bar with little things that make a difference, and I think they’ve hit on a wonderful one with this!  Happy cruising!