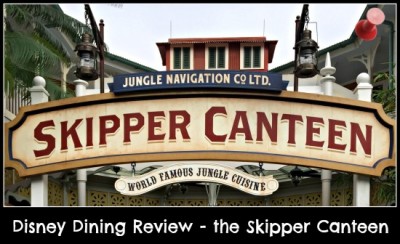 On our most recent trip to Walt Disney World over Marathon weekend, we had the opportunity to try the Magic Kingdom’s newest dining experience – the Jungle Navigation Co. LTD. Skipper Canteen. The Skipper Canteen is located in Adventureland across from the classic Jungle Cruise attraction and is themed as the after-hours hangout for off-duty Jungle Cruise skippers. 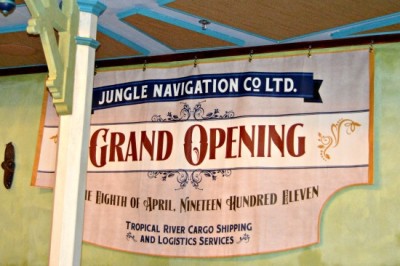 While the Skipper Canteen is a table service restaurant, Advanced Dining Reservations are not currently accepted, making this one of the few walk-up dining options on-property. The afternoon that we dined there, we simply walked up to the host stand and asked to have our name added to the list. We were told that there was a 45-minute wait for our party of 6, which seemed fairly reasonable, and the host took our phone number to send us a text message when our table was ready. We were then free to enjoy the surrounding Magic Kingdom attractions while we waited for a table. 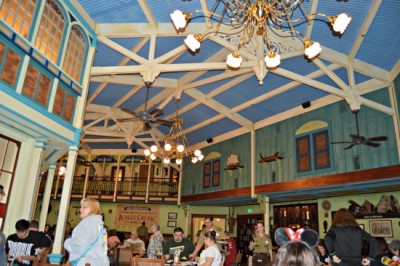 As promised, approximately 45 minutes later we received a text notification that our table was ready, so we headed back to the Skipper Canteen where we were seated immediately. There are 3 dining rooms in the restaurant, and we were seated in the large, main dining hall. The main dining room is brightly colored in shades of blue and green, and brimming with Jungle-themed décor. 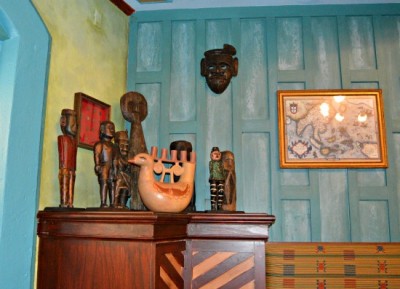 Our friendly server greeted us, gave us an overview of the restaurant’s theme, and informed us that the menu was full of “exotic” cuisine representing the countries visited on the Jungle Cruise attraction – no basic burgers or chicken tenders here! While the adults in our party were feeling adventurous, the children at our table were less than thrilled to hear about the “exotic” fare… Being experienced Disney diners, we assumed that the children’s menu would contain at least a few kid-friendly staples, but were surprised to find the menu devoid of basic items – even the kids’ Mac and Cheese was made with béchamel and contained ground beef. 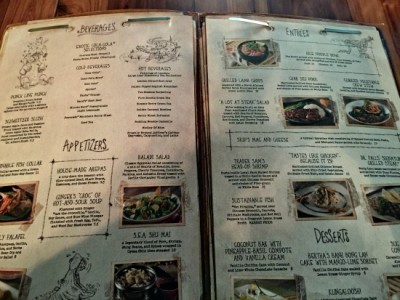 While we perused the menu, we snacked on the complementary bread service, which consisted of a warm multi-grain loaf served with a spiced honey dip. Both the bread and dip had a faint Indian-inspired flavor, which the adults enjoyed, but the girls were leery of. Considering all of the hype about the unusual cuisine, all of the adults at our table enjoyed their meals. 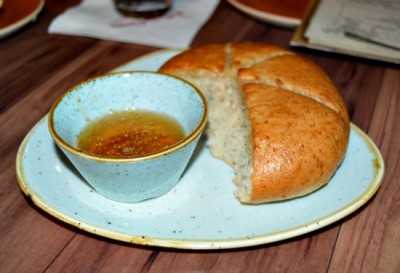 Scott ordered the “A lot at Steak” Salad, which included Thai-marinated flank steak, hearts of romaine, carrots, red peppers, cucumbers, red onions, cherry tomatoes, and was topped with an Asian dressing. The salad was light and fresh, perfect for a late lunch on a warm day, and the steak was tender and flavorful. 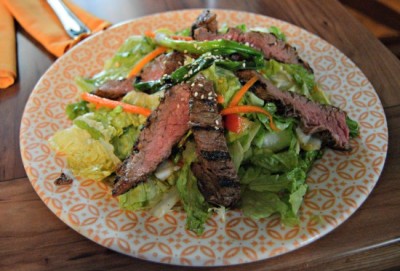 Elizabeth went with the Char Siu Pork, which featured marinated grilled pork tenderloin medallions served with Chinese broccoli and white rice. The pork was tender and grilled to perfection. The marinade was fairly mild in flavor, and not at all over-powering. The Chinese broccoli was a bit unusual – it looked like a stalk of wilted leaves, and tasted like a cross between spinach and traditional broccoli. 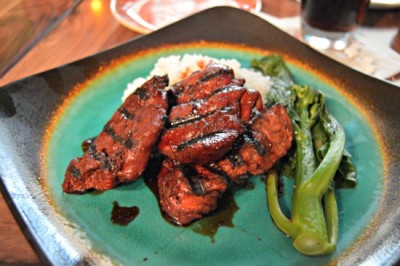 Our companions opted for the House-Made Arepas, the S.E.A. Shu Mai, and the Skip’s Mac and Cheese. The Arepas are a South American inspired appetizer, consisting of slow-cooked beef, black beans, tostones, and queso fresco. They were presented in a somewhat deconstructed fashion, with each item beside the next, and we were told that they were quite tasty. The tostones (which are fried plantains) did not have a strong banana flavor and the dish was not too spicy.

The S.E.A. Shu Mai is an Asian inspired appetizer, made with pork, shrimp, mung beans, and spices wrapped in Gyoza skin and steamed. The dumplings were served in a small silver pot and included a side of soy sauce for dipping. Our companion really enjoyed the S.E.A. Shu Mai, noting that the dish was quite spicy. 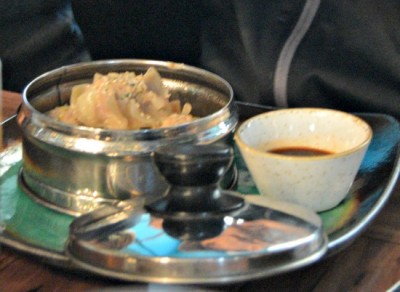 The Skip’s Mac and Cheese is an Egyptian inspired entrée that includes spiced ground beef and corkscrew pasta in béchamel sauce, and is served with Chinese broccoli. Our companion noted that the béchamel had a fairly strong cinnamon and nutmeg flavor, which he enjoyed, but could prove to be over-powering for others. He also noted that the ground beef was quite spicy, making the dish distinctly different from any other Mac and Cheese he had previously tried. 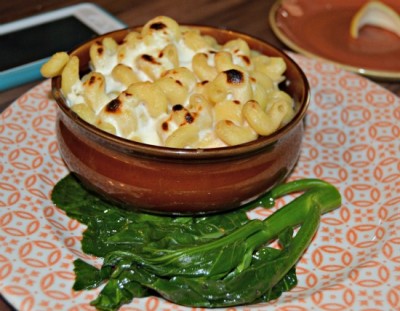 After much persuading, the girls finally decided on the children’s Mac and Cheese. As previously indicated, the dish normally comes with ground beef (though not the spicy beef that comes in the adult portion). In an attempt to make this dining experience a little less adventurous, we ordered the Mac and Cheese without the beef, but after a few requisite bites, the girls wanted nothing to do with it due to the strong cinnamon and nutmeg flavor in the béchamel. The kid’s Mac and Cheese was served with plain steamed broccoli, but the broccoli was barely cooked. According to the girls, the best part of the meal (i.e. the only thing that they would eat) was the dessert, which was a small gooey, flourless chocolate cake. 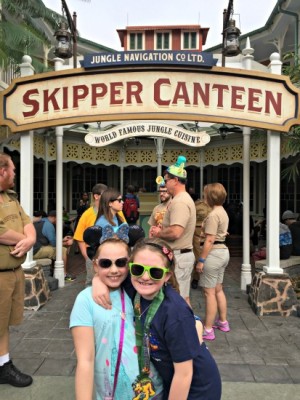 All in all, the Jungle Navigation Co. LTD. Skipper Canteen has a lot of potential. The location is fantastic, and the Magic Kingdom was in need of an additional table-service option. The decor of the restaurant fits in perfectly with its Adventureland setting, and fans of the classic attraction will enjoy all of the playful nods to the Jungle Cruise.

That being said, we would not be surprised (or disappointed) to see some changes to the menu options over time, especially on the children’s menu. The current menu feels like a bit of a miss for the family-oriented Disney parks, but would be a unique option for an adults-only meal or dining with adventurous kids. Another item of note is that the Skipper Canteen does not currently accept the Tables in Wonderland discount card, but does accept the Disney Dining Plan as 1 table service credit.

Do you plan on trying the Skipper Canteen? What is your favorite dining experience in the Magic Kingdom? We’d love to hear from you in the comments!