As a travel agent for The Magic for Less Travel, I had the unique opportunity to attend a luncheon today in New York City. At this event, Disney Cruise Line made some special announcements. Specifically, the new destinations for the 2010 sailings of the cruise line. The location of the event was a Scandinavian restaurant, called Aquavit, the first hint of where theDisney Magic would be going in 2010.
It was an intimate event, with no more than 80 people attending: travel agents, book editors, and news reporters. Captain Tom of the Disney Magic was there, interrupting his vacation and flying in from Europe for the event. Also in attendance was Tom McAplin, President of the Disney Cruise Line. There was even a special guest: Samantha Brown of the Travel Channel.

Disney will once again be offering European cruises in 2010. The Magicwill be moving to Europe temporarily. This time though, not just for the summer, but five months from April through September. There will be a lot of unique itineraries, including four 12-night sailings to Northern European Capitals. This will include an overnight stop in St. Petersburg, Russia, as well as a stop in Warnemunde, Germany. The hope is that at the Germany stop, there will be a shore excursion to the Meyerwerft shipyards so guests can see the new ships being built. These sailings will be out of Dover, England. Rates for the 12-night Northern European Capitals itinerary start at $3,649 per person for a category 11 stateroom.

The remainder of the 5 months will be filled with 10- and 11-night Mediterranean sailings, which will offer new ports of call. New ports added to the Mediterranean Cruises are Tunis in Northern Africa, the island nation of Malta, and Corsica (an island oasis off the southern coast of France known as the birthplace
of Napoleon.) The Mediterranean itineraries will be leaving from Barcelona. There will also be some unique repositioning cruises, including two 14-night transatlantic crossings, a 7-night cruise from Dover to Barcelona, and an 8-night cruise from Barcelona back to Dover.

They also mentioned some trying to arrange some unique “Port Adventures” specifically designed with children in mind. There was mention of a Viking-related excursion in the Baltics and fairy tales perhaps in Germany.

There is news for the Disney Wonder also. Rather than sailing 3- and 4-night cruises, it will switch to 4- and 5-night cruises to Nassau and Castaway Cay, with a stop in Key West on the 5-night cruise. This change in itinerary will just be for the summer months of 2010.

As a special treat for those of us in attendance, we received a box of goodies on the way out. Each of the items in the box referenced one of the 2010 ports of call.

For a complete list of the 2010 itineraries, visit:https://www.themouseforless.com/tripplanning/dcl/cruisedates2010.shtml. Guests will be able to book these new itineraries begining Tuesday, October 14, 2008. To book one of these cruises, contact The Magic for Less Travel as soon as you know the itinerary that interests you most. Some of the more popular itineraries and cabin types are sure to book fast! 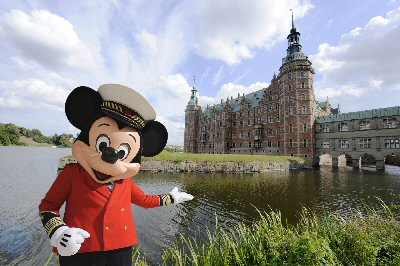