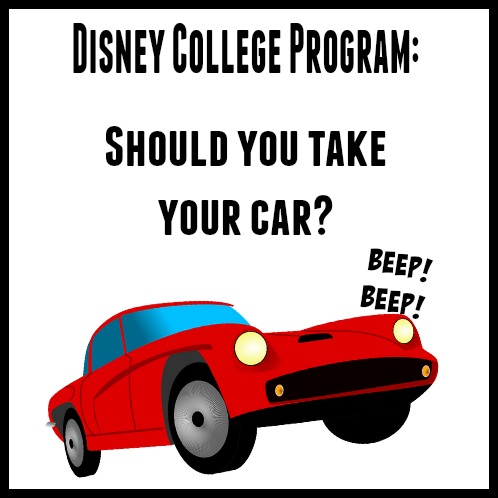 Congratulations on getting accepted to the Disney College Program! The first decision you probably want to make now that you’ve accepted your role is if you will be taking a car with you or not. There a lot of valid points on both sides of the argument that can make a decision pretty difficult to come to. Even if you don’t have a car of your own that you could be taking, read on to get the lowdown on some of the transportation details when you’re on the Disney College Program in Orlando.

Getting to work: I personally took the bus to work every day during my Disney College Program and over the five months I was there I had two instances of my bus being messed up. I know there are a lot more horror stories out there of the other buses constantly showing up late or not showing up at all but generally they are pretty reliable. The big sticking point is that you do need to leave pretty early for your shift, sometimes up to an hour and a half or two hours early, if you want to get there before you need to clock in, thanks to the commute. It’s a little more relevant for those CPs who work in the parks as they usually have a bit of hike to get to their work location after their original bus commute. The apartment complexes are nearby, but not on property by any means, and the buses all have other stops to make.

My clock-in location was only a 3 minute walk from my bus stop, but I consistently had to catch a bus on average an hour and ten minutes before my shift was scheduled to start because of the additional stops and travel time. In high traffic times (spring break, summer, winter holidays) the roads are clogged and a 36 minute commute can take an hour and a half. The buses can get crazy crowded at park closing as everybody gets done with work at the same time, meaning sometimes you’ll have to wait for the next bus to arrive just to start the commute home.

For some people, all this time spent commuting is frustrating and a waste. Those are the people who might want to consider taking their cars. I was 100% fine with a 36 minute commute each way every day. I got more for-fun reading done in my time in the Disney College Program than I think I managed in all four years of undergrad. I never had to worry about budgeting for gas nor did I ever experience going to head to work only to realize I forgot to fill up my tank the night before and I have to stop now or I’ll never make it there but if I stop I’ll be late!

I think the ultimate factors in this category are these:

Getting around on your days off: One thing a lot of people worry about is that not having a car will restrict what they can do on their days off. In some ways those people are absolutely right. Disney does provide a bus route to a few non-property places for CPs to use: Walmart, Publix, the Post Office, and a bi-weekly route to the mall. Unfortunately that is about it. If you want to go somewhere else you’ll need to find a friend with a car or take a taxi/Uber. My roommates and I loved Target so it was a blessing that four of them brought cars. If you want to spend all your free days at the beach or exploring, taking a car will make things a lot easier.

But! It’s not impossible to do things away from property without a car! First off, Disney plans trips to nearby attractions and provides transportation (sometimes free, sometimes at a charge but usually also includes admission to the place). Beaches, football games, nearby towns like Celebration! And they usually plan several trips so that you can pick one that matches with your schedule. A quick ten minute walk from the Chatham/Patterson/Commons area is one end of the I-Drive Trolley route which will take you all the way to the best outlet mall in Orlando (Premium Outlets International Drive), to the doorstep of Universal Studios, and many other attractions and restaurants in between. Your cast member ID gets you fare for a just a quarter each way!

I mentioned before about taking a taxi places and while it’s not a great idea for things grocery shopping it is possibly the cushiest way to get around Orlando without a car. I’ve used both Lyft and Uber in Orlando and had great experiences, plus I felt famous getting in and out of those nice cars!

Other considerations: For some people it’s not going to make any sense to fly into Orlando for their move. If you live within reasonable driving distance or have friends and family in the area you’re going to want to visit often, it’ll be a good idea to take a car. If you just cant fathom packing your life down into just a suitcase or two then you should probably bring a car. If you need to visit a doctor regularly for any reason, it’s probably a good idea to bring a car. If you get car sick as a passenger or if large vehicles/buses make you anxious in any way, take a car.

My reflection on not taking a car: I flew down with Southwest with my life in two suitcases and two carry-ons. I ended up with so much stuff by the end of my program that I had to send two suitcases back with visiting family friends just to get everything home, and even then I ended up throwing stuff away or leaving it behind. I wished I had been regularly sending stuff home that I didn’t need instead of letting it sit in my closet!

But like I said, I enjoyed my commute immensely. I enjoyed grabbing the bus to the parks and not having to fight end-of-Wishes traffic at the end of a long day at MK – even if the trip home was long. My great roommates were willing to let me tag along on grocery trips and to Target. I also gained a lot of confidence traveling on my own by taking Ubers and plotting out trips on the I-Ride trolley. I wish I had taken my car but I wasn’t really hindered in any way by the fact that I didn’t. I could figure out a way to get to pretty much any place I wanted!

Final Advice: If you can take a car, do, but still try and take the buses when you can to save on gas. Yes they’re a pain with the long commute but those dollars in your pocket will start to look more attractive than any time potentially saved by driving yourself. Trust me, there will be a lot of amazing stuff you’ll want to buy. Don’t stress out if you can’t take a car for one reason or another. Definitely don’t run out and buy a car if you don’t currently have one – unless of course you were thinking about getting one and it’s a good time to do so. Getting around to everything you want to do is 100% possible with a little bit of creativity (and making friends people who with cars, that helps a lot)!

Did you bring your car with you while you were on the College Program? What are your thoughts about this conundrum?