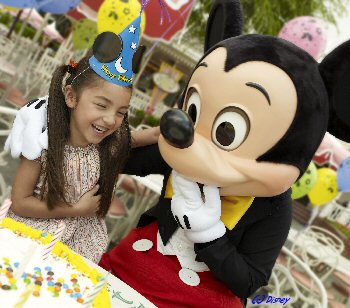 The King Edward Hotel in downtown Toronto is just what you might imagine from the name – an elegant, historic building that’s hosted many special events over the years. On Thursday, September 18, it added one more to its roster: a Disney press event to announce the plans for 2009.

The doormen holding bunches of Mickey Mouse balloons were smiling as we arrived, and we were quickly ushered into the lobby where we were given lanyards with our names on them and the question of the day, “What will you celebrate?” Disney Cast Members guided us to the next room where we were given flutes of champagne and encouraged to chat with others. Soon after, the doors opened and we entered the dining room, which was brightened with more Mickey Mouse balloons and a large screen with clips showing people enjoying the Disney parks and suggestions about celebrations – birthdays, anniversaries, honeymoons…I could see a theme emerging.

Our table was lit by candles that smelled like the H2O soaps and shampoos in the resorts and that scent definitely brought back some happy Disney memories. Our table was sprinkled with Mickey confetti as well. After a delicious meal, presented by VERY attentive and helpful servers, the presentation began. We first met the Canadian member of the Mom’s Panel with her nine-year-old daughter; they’d flown in from British Columbia for the event. A representative from the Ypartnership group (the research company that did the survey in the US and Canada to find out the info about “traveling trends”) explained the research they’d conducted with both Canadian and US travelers suggested many people take vacations in order to celebrate a family milestone or special event. The survey had also found that people tended to spend more money and stay longer on trips that had this kind of “celebration” purpose. Huh, I thought, sounds like the kind of thing Disney will want to get in on! And yes, they found that the Disney Parks were the number one destination of Canadian families taking a “celebration vacation” – in fact, it scored higher than all the Canadian destinations added together.

We could see where this was going. Then Bruno Jauernig, Vice President of Marketing for Walt Disney World and fellow Canadian, took the stage. Bruno announced that 2009 would indeed be the year of the “celebration vacation” at Walt Disney World and the Disneyland Resort, and that they’d be doing something very special, something never done before: on your birthday, you get in for free. That got a round of applause. Bruno then showed us a preview of a commercial that will be released next week – I noticed more than one person sniffling a little as we watched a little ballerina complete a dance performance as a Mickey-shaped balloon followed her, dangling a card with an invitation to Walt Disney World. Bruno drove the point home about how special this type of celebration can be: “A little girl won’t remember the presents she got on her sixth birthday, but she will remember riding Space Mountain seven times in a row on her sixth birthday, and that her dad was with her – slightly nauseated, but with her – the whole time.”

Then Mickey and his friends arrived and began greeting the guests. It was fun to see the reporters, usually cynical and unimpressed by anything that happens, hurrying to get photos with their favorite characters. I picked up my cell phone to call my son (a fellow Disney geek, he had insisted that I let him know as soon as I found out the theme for 2009), and Donald Duck rushed over to distract me. As I tried to talk on the phone, Donald hugged me, kissed me repeatedly with his beak, and otherwise teased me mercilessly while my friends and colleagues at the table laughed at me. My son found it pretty funny as well.

Finally, we were each presented with a cake iced to look like a gift-wrapped box complete with ribbon, and with a personal nametag attached. Since many of us had to leave at this point, we were given special boxes to carry the cakes home. That wasn’t quite the end, though. On our way out we were each handed a gift bag containing a birthday button, a scroll with details of the event (including the planned “street parties”), a box of greeting cards with Disney themes (I guess so we can invite people to go to WDW to celebrate), and a Mickey balloon tied to the handle. 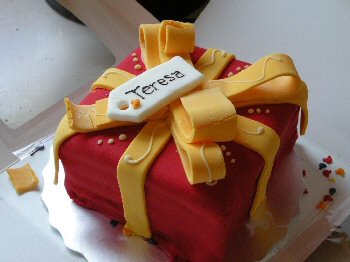 This is one of the individual cakes we got at the “celebration vacation” launch. I carried it home and as you can see the ribbons got a little damaged. But I still think they look pretty cool!

I don’t think this event is quite as exciting as the Year of a Million Dreams, but if the Cast Members really do make the effort to recognize people who are celebrating special events I think it will be a lot of fun.

If you’re already a Walt Disney World or Disneyland Resort Annual Passholder, you won’t be getting a credit or refund for the price of your annual pass. But, you can choose from some other birthday treats: