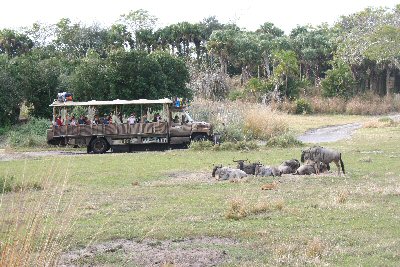 Last December, I had the opportunity to interview some of the Disney Cast Members involved in animal care for a magazine article. It was a great experience (the highlight was riding the Kilimanjaro Safaris area in one of the keepers’ vehicles, going off the track, and getting close-up looks at many of the animals, with commentary by the Animal Operations Director), and as always happens I came away with lots more information than I could use in the final article. I thought Magically Speaking readers might be interested in learning more about the animal programs, so I’ve planned a series of articles to share some of the “behind-the-scenes” information I learned.

If you’ve been on the Kilimanjaro Safaris ride in Disney’s Animal Kingdom (and if you haven’t, head over there as soon as possible!) you know that, as part of the ride’s storyline, you become involved in a mission to save a baby elephant named Little Red. What you might not know is that Animal Kingdom is involved in a real-life mission to create more elephant babies (and other animals, too). And it’s succeeding. 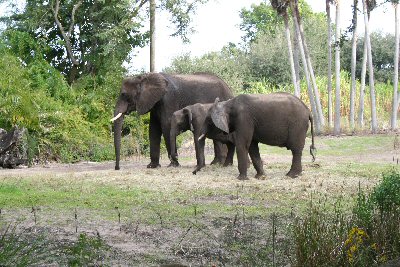 That success is due in part to the efforts of John Lehnhardt, Animal Operations Director. He joined the AK team even before the park was built, and played a major role in designing the various animal habitats that, linked together, form the Safari terrain. He and other members of the AK team worked hard to ensure that the park (like AKL and Epcot’s The Seas with Nemo and Friends) was accredited by the American Zoo and Aquarium Association and able to be part of the consortia that oversee the breeding of the animals. The members of the various consortia (there is one for gorillas, one for African elephants, etc.) meet on a regular basis to discuss which animals in accredited zoos would make good genetic matches — sort of “arranged marriages” done for the sole purpose of producing healthy offspring. Disney, in fact, has also taken on the role of maintaining many of the records and family trees of the animals in the various zoos and parks in North America — records that are essential for managing the successful breeding of these animals.

You’ve probably noticed one of the areas where Disney’s had some significant successes — who could miss those cute baby elephants playing together near the watering hole as the Safari trucks roll past? Since AK opened a little more than a decade ago, three elephant babies have been born in AK and the lessons learned have helped other zoos breed elephants as well. The secret, according to Lehnhardt, is to give the elephants as natural a life as possible, both in terms of their habitat and their social interactions.

The herd in AK is actually the largest in North America, and includes three adult males (called bulls). The bulls need to be kept separate from the females and their babies — you’ll see as you ride through on your truck that they are in different locations. Most zoos don’t want to have bulls at all, because they are more difficult to manage, so having three is quite unusual — and a big help to any breeding programs.

When women want to know if they are pregnant, they can buy a pregnancy test at the drugstore and look for a blue line to indicate pregnancy. The AK elephants also get pregnancy tests — but when those come out positive, you don’t see a blue line, you see the Mickey Mouse outline. (Really, Disney should sell tests like that for people, too. Wouldn’t that be more fun than just a blue line?) The vets working in WDW can also tell if the baby is going to be a boy or a girl based on the mother’s hormone levels. By 126 days, the baby’s trunk is visible on the ultrasound. (Yes, they have a portable ultrasound machine that they use to assess the pregnant elephants.) 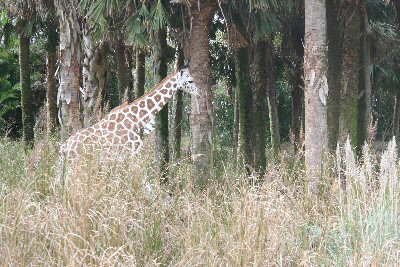 You may also have noticed the baby giraffes born in both AK and AKL — another very successful breeding program. I was lucky enough to be doing a backstage tour the first day a baby giraffe was let out onto the Safari habitat with her mother. At first, you could see she was a little nervous. She stuck close to her mother’s long legs and stared wide-eyed at our truck. But within minutes, encouraged by her mother’s calm behavior, she was enjoying the freedom of being able to run around and explore. It was so much fun to watch this baby discover her new home.

Not all the animals born in the Animal Kingdom stay there. Some — including two of the gorillas who were born here — move on to other accredited zoos. In at least one case, they actually moved back to the home of their ancestors. The white rhinos have had seven babies since they were moved into AK, and Disney has reintroduced two of them back to their ancestral homeland in Uganda, Africa, where they are living on a reserve. White rhinos are endangered but bringing these two animals over to Uganda should bolster the reserve’s breeding program.

Other animals are raised at WDW but never seen by the guests. Some very small, very endangered birds called the Micronesian kingfishers are being bred in an “offstage” area of AK devoted to avian research and breeding. Lehnhardt says there are only 60 of these rare birds left in the world. Twenty-one have been hatched in AK. Disney’s efforts may rescue these birds from extinction. Key Largo wood rats are another behind-the-scenes animal being bred in Animal Kingdom.

Some of the breeding programs have actually been a little too successful. I haven’t yet figured out how to tell the difference between male hippos and female hippos, but fortunately the Disney animal keepers can. On the Safari tour, the male hippos live in one pond and the females on the other side of the road. That’s because they’ve already had 13 babies — and Lehnhardt says “that’s enough for now.” Keeping them apart seems to be the most effective method of birth control.

Many of the Disney Cast Members who work in AK are also involved in projects that extend beyond WDW to help endangered species. For example, Eduardo Valdes, head of Nutrition in the Animal Programs (and who earned his PhD at the university where I work!), is working on a project with the rare Puerto Rican crested toad. Another Cast Member makes regular visits to Colombia to help protect the cotton top tamarin, a monkey that has become endangered because so many trees are cut down.

So the next time you see the baby elephants with their mothers at the watering hole, or watch a mother gorilla sharing food with her baby, or catch sight of a baby giraffe stretching his neck beside his mother as they both reach for some tasty leaves, remember that you’re seeing something pretty special. Disney’s success in breeding these, and other, animals shows that they’ve created a healthy environment for them, and makes a real contribution to protecting endangered species around the world. 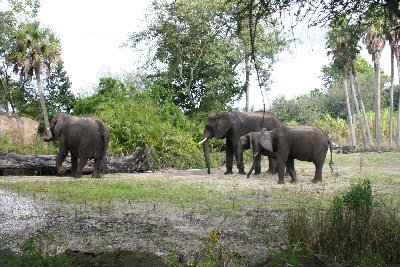