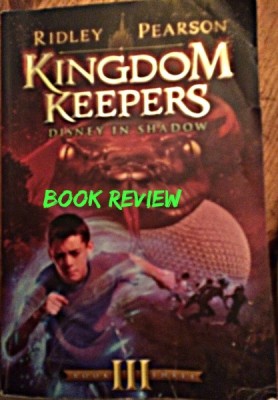 I was so impressed with the first two Kingdom Keepers books that I was excited to get my hands on Kingdom Keepers III: Disney in Shadow.  Lucky for me, my 10 year old daughter is very willing to share her books – once she’s finished with them!

The Kingdom Keepers (middle school students Finn, Willa, Philby, Maybeck, Charlene, Jess and Amanda) are frantic. Their friend and mentor, Wayne, an Imagineer who worked with Walt Disney, is missing. They can only assume that Maleficent, Chernabog, and the Overtakers are behind it. They’ve been crossing over into their DHI (Daylight Holographic Images) at night, when the theme parks are closed, to search for him. They’ve searched every corner of the Magic Kingdom and Animal Kingdom, so they are ready to start searching Epcot and the Studios.

Before they begin, Jess has a vivid dream about Wayne, in which there are many mysterious symbols. Since the kids know very well that Jess’s dreams often come true, they realize that these symbols are actually clues left by Wayne. The kids are determined to correctly decipher the clues and rescue Wayne before it is too late!

Once again, Ridley Pearson has crafted a thrilling page turner aimed at middle grade readers, but certainly appropriate for older Disney parks fans. This book takes place mainly in Epcot with a very exciting scene at the Studios.

There are two main reasons Disney fans will love this book. The first are the clues that Wayne has left. I found myself racking my brain, delving into my knowledge of the Walt Disney World parks, to try to decipher the clues along with the kids.

The second is the fact that the action takes place in the theme parks. Mr. Pearson does an excellent job of describing our beloved parks in great detail, so that I could picture exactly where each scene was taking place.

This book was written in 2010, and as we all know, Disney parks change all the time. So don’t be surprised when there are references to Fass Pass kiosks and Maelstrom. One scene that is almost prophetic is when the kids stumble upon a test of the new Soarin’. However, in the book, it’s not Soarin’ Over the World, but Soarin’ Over New York!

One particularly creepy scene happens in the closed Epcot pavilion Wonders of Life, and I found myself envious of the kids, despite their desperate circumstances, since they got to explore a closed attraction!

An interesting character makes her debut in this book: Wanda, Wayne’s daughter. I hope that she returns in future books. She proves to be a great adult advisor in Wayne’s absence and has almost as much knowledge about the parks and their workings as Wayne does.

Although this book, as all the books in the series, is aimed at children, keep in mind that some of the scenes are downright creepy. The kids are menaced by, at turns, mimes and gargoyles from the France pavilion, crash test dummies from Test Track, Vikings from Maelstrom, and Gigabyte from Honey, I Shrunk the Audience. This being aimed at children, however, you can assure frightened youngsters that, just like in Disney films, all the kids are all right in the end.

At the end of this book is a preview chapter of the next book in the series, Power Play. My daughter got this book for Christmas, so expect me to borrow from her in the new future!

Have you read Kingdom Keepers III: Disney in Shadow? What were your thoughts?