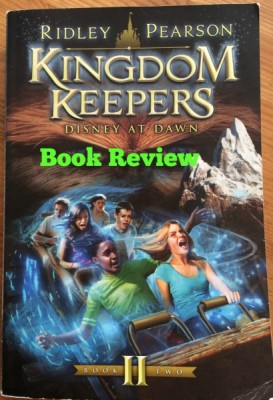 The Kingdom Keepers – Finn, Willa, Philby, Maybeck and Charlene – are excited that their DHI’s (Daylight Holographic Imaging) are going back online in the Magic Kingdom. To most of the world, this simply means that the five teens will now have holographic images of themselves serving as interactive guides throughout the park.

Of course, the Kingdom Keepers have a secret – that when they fall asleep, they can find themselves mysteriously inhabiting their holographic images in the Magic Kingdom.

Their last adventure, told in Kingdom Keepers: Disney After Dark, had the kids team up with a mysterious Imagineer named Wayne, who let them know that after dark, the characters in the Walt Disney World parks come alive. Some of them are good, and others…well, how do you think a real life Maleficent would behave?

Speaking of Maleficent, although the kids managed to trap her at the end of Book 1, at the beginning of Book 2, she is plotting her escape. As the kids get ready to ride a float through the Magic Kingdom, a terrible lightning storm lights up the Central Florida sky. Is it just another one of Florida’s afternoon thunderstorms….or is it a sign of Maleficent’s magic?

The first book took place almost entirely in the Magic Kingdom, with just a few forays into the Studios. This book takes place mostly in Animal Kingdom, although the kids do go through the other parks to collect clues. And since the DHI program is not yet up and running in that park, the kids must explore the park during the day, in their human forms. (Wayne does tell the kids that the DHI program is scheduled to be in place at all the theme parks, including Disneyland and the cruise ships, within two years, so there is a lot more this book series could cover.)

As in the first book, Walt Disney World fans will enjoy all the action that takes place in the parks. The kids must explore the park while dressed as cast members, and they are able to go behind the scenes at some of our favorite attractions. To add to the suspense, it appears that Maleficent has the ability to control the animals who live at the park!

One of my favorite parts in this book is when Charlene is charged with spying on the enemy. She realizes the best way to do this is to borrow DeVine’s costume so she can blend in with the scenery at Animal Kingdom.

This book was published in 2008 so there are some details of the park that are out of date. We all know how quickly things can change at Walt Disney World! But still, following the kids through the park as they race to find a missing friend and discover what Maleficent’s plan is should make any Disney parks fan giddy with delight.

Like all the books in this series, this is aimed at middle readers, although adult fans of Disney parks like myself will surely enjoy it. From the lightening storm in the Magic Kingdom to the desperate race through Expedition Everest, you will find yourself cheering the Kingdom Keepers on.

Have you read Kingdom Keepers II – Disney at Dawn before? What are our thoughts?