Have you ever wanted to ride on a segway.  You know, those personal transport systems you see people riding around the Walt Disney World resort and in shopping malls and police are using them to patrol.

Well, Disney provides a tour at Epcot called Around the World at Epcot.  This tour hour tour takes you on a tour through World Showcase on a Segway!

The tour begins very early, before the park is open.   We met our guide near Guest Relations where we were given name badges and signed the release forms.  Then we walked over to Innoventions where we were given helmets and watched a brief safety video.  Then we were each given a segway.  They were adjusted and we were taught how to step on and off of the segway and how to go forward and back and turn around.  We were also taught how to stop.  We had to do this with the Cast Member stepping right in front of us.

Then it was on to more difficult tasks.  We had to slalom between cones.   Then go up a hill and down a hill.  Then we had to stop halfway down the hill.  Once everyone had completed the training we left Innoventions to head to World Showcase.  The park still wasn’t open so there were not many crowds.  We started in Mexico and worked our way around World Showcase.  We stopped in each of the pavilions and the cast member would point out information about each of the pavilions.  We discussed history, architectural details and even were shown some hidden mickeys along the way.

Once we reached Italy we were given about 20 minutes of free time to “play” on the segways.  We also took photos while we were in this area.  By the time we made it further around World Showcase Epcot had opened and there were people walking through the International Gateway entrance and walking toward Future World so we had to be very careful to not run into people.   People aren’t used to watching for them so sometimes you have to stop quickly as someone will step right in front of you.  Luckly nobody was hurt during our tour.

Once we were complete with the tour we headed back to Innoventions where we returned our segways and were given pins.  It was a great tour and was enhanced by the segway experience.  The tours are offered every day and is for all guests 16 years old and up.  You have to weigh over 100 lbs and under 250 lbs.  The price of the tour is $99 and discounts are offered for Annual Pass Holders and Disney Visa Card Holders.

If you want to book this, talk to your agent from The Magic for Less Travel or call the tour department. 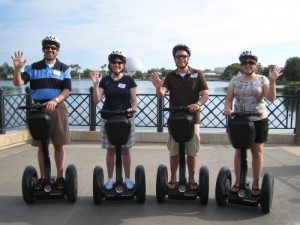