Let’s say you’re a biologist who wanted to research elephant behaviors. Tracking elephants in the wild is pretty challenging and it’s tough to get close enough to monitor what they’re doing. They’re not accustomed to people, so your presence is likely to change their behavior. On the other hand, observing elephants in the zoo means you’re seeing the animals in a very unnatural environment.

There is, however, a place — some might call it a Magical place — where a number of elephants are in a relatively natural environment where they have freedom to move around, and are part of a large enough group that they can form the kind of natural herd relationships they would in the wild. That place just happens to be my favorite vacation spot: Walt Disney World.

And, yes, research happens there. Disney’s Animal Program team connects with graduate students from the University of Florida and other schools to develop research studies that will advance our knowledge about the animals we share the planet with.

Some of this is behind the scenes. The optimal feeding practices for each species, for example, have been carefully researched — more about that in a future article. But you can see some of the researchers at work by visiting Conservation Station.

One current — and fascinating — study is looking at how elephants communicate with each other. Anne Savage, Conservation Biologist at Disney’s Animal Kingdom, explains: “Elephants make low-pitched vocalizations that are hard for humans to hear and some of the sounds we can’t hear at all.” The research team used special collars for the elephants with microphones inside that allow the elephant vocalizations to be downloaded to the computer. The elephants’ movements are also recorded by video camera, and then the sounds are carefully matched to the elephant’s behaviors. 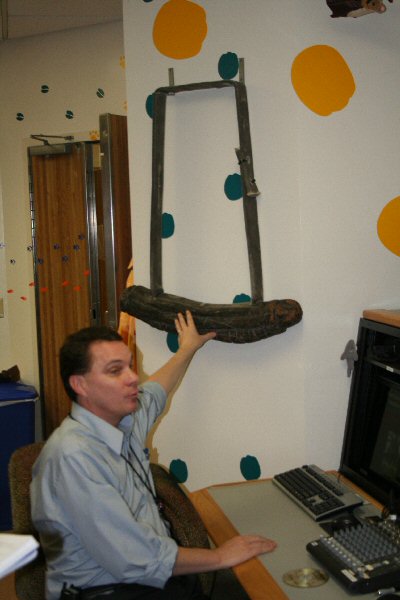 An example of the collar used to study elephant vocalization.

And here are some of the things they’ve learned:

But two of the discoveries that I think are most interesting speak to the nature of elephant relationships. Elephants live — in the wild, and in DAK — in herds. Within those herds, though, they form relationships. Moyo and Thandi, for example, two of the females you’ll see on the Safari ride, seem to be best friends.

What the researchers found was that if Moyo couldn’t see Thandi, she would make a specific pattern of sounds. (I like to translate it as “Hey, girlfriend, where are you?”). Thandi would then respond with another pattern of sounds (possibly “Over here, found some good eats” or “I’m coming, hang on”) and the two would then move closer together. To call Moyo, Thandi would make a different sound. Almost — well, almost like they had names for each other.

The second discovery involves mothers and babies. When Nadirah, who is four years old now, was a baby, the researchers noticed that she’d make protesting noises if her mother, Donna, tried to end her nursing session, or wouldn’t nurse her when she wanted to. Anne Savage played the recordings of the sounds for me and it made me laugh — the high-pitched squeals sound almost exactly like many of the toddlers I know getting upset when things aren’t going their way.

Most of the time, the researchers found, Donna would give in and let Nadirah nurse. “We think it works by annoying the mother so she just wants the baby to stop,” says Savage. 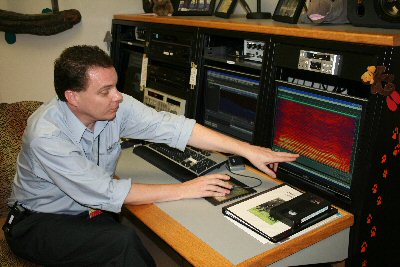 An example of the sound waves displayed on the monitor.

What these two discoveries say to me is that elephants, as different from us as they may be in size and shape, are actually a lot like us in other ways. They have their best friends, and they like to hang out with them. Their toddlers have tantrums, and just like us, the moms give in sometimes to get the crying to stop.

Elephants aren’t the only animals being studied. When an ailing sea turtle was found near Vero Beach, Disney staff brought him to the Living Seas where they found more than 70 pieces of plastic trash in his stomach. (At Conservation Station, they’ve saved it all and mounted it on a display so you can see what this turtle had consumed.) 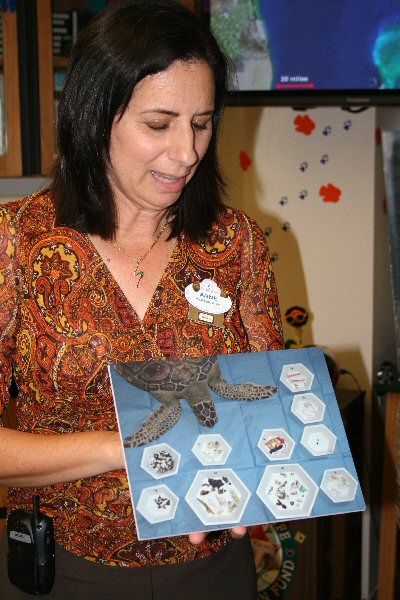 A display of Little Crush and the many plastic items he injested.

Little Crush, as the turtle was named, was cared for at the Seas until he recovered. Before they released him back at Vero Beach, the research team decided to install a transmitter so they could see where he went. The transmitter held up for about a year, and revealed that Little Crush spent most of his time near the Vero Beach area of the Florida coast, moving out into the ocean and back again from time to time. Then, near Christmas, he swam to the Bahamas, and returned to Florida after the holidays.

These studies, and many others being conducted with the animals at WDW, take advantage of Disney’s unique environment to take some big steps forward in understanding the needs and behaviors of these creatures. Savage’s hope — and mine, too — is that as people learn more about the animals, they’ll care more about protecting them.