Over the past few months, Disney fans have been teased with the “Are you 23?” question. There was much speculation about what this meant and much anticipation over the announcement scheduled for March 10.

Now that the announcement date has come and gone, we have a look at this new offering from Disney, and the opportunity to answer the question: “Are you 23?” To listen to the press conference, visit The Travelears podcast here.

The D23 (or Disney 23) fan club was revealed at the recent Disney shareholder’s meeting. The number refers to the year that Walt Disney founded the Disney Studios. The club is the official community for Disney fans and offers to take members into the Disney Company’s wonderful archives through gorgeous photographs in its glossy new magazine, Disney twenty-three, and through its website.

So, what does all of this really mean? Disney’s official fan club is here. For the cost of $75 (plus shipping), members receive a one-year membership to this official club. Yes, we can be part of unofficial groups for pretty much no money, but the official one will cost us. For the $75, we receive the magazine (more on that below), a membership card and certificate, and a surprise gift. Charter membership (meaning a membership purchased before the end of 2009) will also include discounts to the newly announced Disney Expo, special events and merchandise, and a bi-weekly e-newsletter.

If you don’t want to pay for membership, Disney is now offering a fan website via www.disney.com/23. This site is available to everyone who wanders upon it. It offers news, features, and information found in the archives. It is about all things Disney or related to Disney. This isn’t a trip planning site or place to find out what is going on in the theme parks specifically, but it is the place to explore the company’s history.

For those who will become members, one of the biggest parts of membership is the Disney twenty-three magazine (or publication, as they call it). The publication will be offered four times per year at a price of $16 per issue (yikes!). On a positive note, it really is a big and beautiful magazine, with wonderful photography and articles that unofficial publications just can’t compete with. On the negative side, did I mention it’s $16 an issue? And not only that, but again, the focus is on the Disney company rather than on trip planning or family activities (as the now-defunct Disney Magazine used to focus on). This may be appealing to some, and just not as interesting to others. 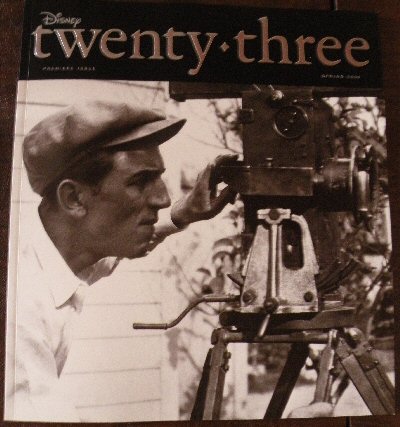 The publication is available only at Disneyland, Walt Disney World, Disney Stores, or via membership. And at Barnes & Noble, taking a little of the exclusivity out of it. Since the price is $16, and a one-year subscription is included with membership, the cover price of $64 does explain some of the price of membership. It’s also the only way to get the publication delivered to your home.

Finally, there is the D23 Expo. The event will be held in the Anaheim Convention Center on September 10–13. Membership offers a small discount on the price of admission. (Also, you only get one admission discount per membership—so if you want two discounts, you and your spouse need two memberships.) You can still attend the party even if you’re not in the club. But since Disney is putting on the party, it’s sure to be done in style.

So, the question now is, am I 23? Well, yes, I am. Admittedly, the price was a bit steep, but my curiosity won out. I would like to see what this club has to offer, and hope to report on it for anyone who isn’t so willing to pay the money.

So far, I have received two mailings from D23. The first was my official membership card. Next came my first copy of the publication. Admittedly, I am writing this review instead of tearing through the pages right now. But I did thumb through to see what was there. The photos are indeed beautiful. It is certainly a high-quality product that is suitable to place on my coffee table. I don’t know if I would have paid $16 for it had it been about almost any other subject, but I suspect Disney knows that about me (and the other members) already. 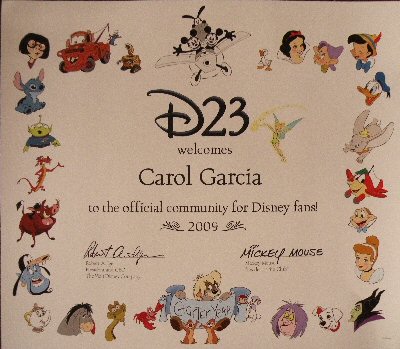 I have seen reports of people getting a litho in their delivery, but my magazine came with a letter from Bob Iger telling me that my surprise gift was coming soon. I did get a small decal to place on my car window while I’m waiting.

While I’m buying into the D23 process right now, I can’t help but feel a little skeptical. After all, I belong to many Disney fan groups and don’t have to pay for the privilege. Although Disney claimed that there is no advertising in the D23 magazine, I can’t help but think that that is because the entire thing is an advertisement for Disney, in one form or another. I also paid part of the membership fee for the privilege of purchasing more Disney merchandise. Not only are there collectibles, but also logo merchandise so that I can proudly advertise their product for them, and seek like-minded individuals out in the parks. Now, I proudly wear merchandise for other groups in the parks (like my Magically Speaking shirt), but for some reason I feel differently about this (probably 75 reasons, to be exact).

Even though I am skeptical, I still am interested to see how this works out. Will many people embrace this idea? Will it go the way of other fun Disney publications that were deemed not timely enough to continue printing? Will Disney address those of us who, while we like the Disney Company as a whole, are really looking for theme park–specific information? Only time will tell. But, for at least the next year, I will admit, I am 23.