At dinner the previous night we were given pickup and transportation  instructions to depart.  There are not lots of flights out of Jackson and  it is not exactly a busy airport.  We had two pickups for the 90 minute  trip back to the airport:  9:15am and 10:15am.  If you had a 9:15am  departure they were picking  up luggage at 8:15am, and the later departure  had luggage at 9:15am.  Since my roommate was on the earlier transportation  list I had to ensure her bags were picked up prior to me setting out luggage, so  I kept a watch on the time while I was having breakfast (which was quite  delicious!)   One of the lodge employees actually sought me out for  bag pickup too as they were running ahead of schedule.  Worked out pretty  well as he picked up my bags and no hassles for me. 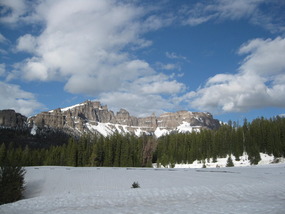 Pinnacle Buttes
Just about  everything I have ever done with Disney has been prompt, and the departure from  Brooks Lake Lodge was no exception.  Our group piled into the van for the  long drive to Jackson.  On the way it was a pretty quiet ride as there are  no radio stations out that way, and our driver didn’t search for one.  I  amused myself waiting for 3G service on my cell phone to pick up to I could see  if I had any voice mail.  After being disconnected from televisions  and communication devices for several days I was strangely comforted by seeing  the cell phone pop into service.
After a very quick and uneventful  trip through airline bag check in with Frontier Airlines, I discovered that I  was OK in the luggage weight department at 46 pounds (I went out with 43.5) and  I shoved another sweatshirt in my suitcase bringing it up to 47lbs.  No  overweight fees so all was good.  Then I made a quick trip through TSA  lines with the friendliest agents I have found in ANY airport anywhere, and it  was time to sit in the terminal and check email.  Ironically I had gone all  the way back to “civilization” in Wyoming and I had no cell phone or internet  service.  Thankfully I had spent the time on the trip down to Jackson  checking mail and I could deal with waiting until Denver, which was my first  layover of (gasp!) THREE HOURS!!  At least Denver was a big airport and  they had free internet.  Plan was to sit down and catch up on paperwork  while waiting for the flight.

This was my  first time flying Frontier and I was pretty impressed.  Reminded me a lot  of Southwest with the comfy leather seats, but this plane had television!   Wow… Television.  Hadn’t seen one of those in about five days and I was  all by myself and could be in charge of channel selection.  Since this part  of the journey was less than an hour I decided to skip the TV on this flight  segment and splurge for it ($6 for flight duration) on the trip from Denver to Indianapolis.   Uneventful flight, and perfect landing (and boy was I due a nice landing after  my last few trips) and I was in Denver for several hours.  Worked a bit,  found a hamburger, and finally boarded the plane to Indianapolis which was about  30 minutes late.  Once in the air the TV started its preview and I happily  swiped my credit card in the reader.   Can’t even tell you how  long the flight was but I enjoyed being in control of the channel changer and  not having to share and I never even got out of my seat.  Landed in Indy  around 11:35pm, waited (and waited, and waited) for luggage, and walked the half  mile to the parking lot.  Was not going to wait for a shuttle as walking was  likely faster at that hour and I was enjoying the pleasant weather, albeit more  humid than Wyoming.  Arrived home shortly after 1am–and the cat seemed happy to  see me.  Everyone else was asleep.
So what did I think of my  great Adventure to Wyoming?  I really loved the trip and the whole concept  of Adventures by Disney and the guided tour.   After my initial trepidation about  going to Wyoming and being out of my comfort zone, I decided to just roll with  what happened because it was unlikely that I would go that way again.  This  was designed as a family trip with kids, and Disney was putting it together, so  nothing was likely to go wrong.    Disney and my Adventure Guides made  the whole experience interesting, and I actually learned a lot about something I  did not know or even think about–which was Wyoming.  I was able to  step outside of my comfort zone (in spanky new hiking boots and souvenir  sweatshirts and jacket too) and enjoy it.
Disney really  delivered a premium experience with this trip.  An Adventures by  Disney vacation tends to be a bit pricey even before airfare, but I do  think that a guest gets a lot when doing this sort of trip.   Its  immersive with many experiences, and guided by people who really know their  facts about the destination.  An ABD includes excellent hotels and meals  and a small group–and all of these items contribute to the enjoyment, and  price.  Plus when someone doesn’t have to plan their activities, and things  go smoothly from one thing to the next, there’s no stress.  My  Adventures by Disney trip was the most hassle-free trip I have done in my  life.  Plus it was fun even without television and  telephones.  And I will make a confession:  it was nice to  decompress and not be so wired in to technology.  My stay at Brooks Lake  Lodge forced me off the telephone and the computer which was a good thing.
Would I do another Adventures by Disney trip?  Absolutely.  It  was a great even with cold weather and snow in the middle of June.