Written by the Disney Imagineers in 2003, The Imagineering Way: Ideas to Ignite Your Creativity is full of excellent tips for someone who longs to have the wonderful career the authors have.  Certain Imagineers write in detail about their valuable stories and how they and others have benefited from their experiences.  Others, though, have simply written a few paragraphs telling how using a certain idea may help future Imagineers.  This non-fiction work teaches that everybody is creative and bad ideas do not exist.

First, The Imagineering Way teaches that everybody is creative.  However, many people are not tuned in to their ingenuity or are too afraid to show it.  They “never allow their creative abilities to surface because they fear what might happen.” (9) Most people are afraid that if they let out their imaginations, their ideas will be either silly, failures, or cause others to think badly about them.  However, the worst thought that many people fear is that they are not creative.

Because of this long list of fears, most people do not do anything.  Fear is the ruthless foe of imagination.  No one should wonder why another person is so creative.  Most likely, they could be just as inventive, if not more so, if they would use their unique skills.  Also, people should expect to try multiple times before achieving perfection.  In some way or another, whether they know it or not, everybody is creative.

This book also teaches readers that bad ideas do not exist.  If an Imagineer has an idea, even though it may sound childish or ridiculous, he always shares it with the rest of the group.  As the book says many times, “In the lexicon of youth, there is no such word as ‘fail.’” (5)

Any idea can be made better.  Sometimes it will only spark an idea into another person’s head.  Either way, the useful idea becomes exceptional because of its results, demonstrating that even a ridiculous idea is not a failure.  Throughout the entire book, the authors constantly remind the reader “that no idea – no matter how ‘dumb’ it may sound – is a bad idea.” (205)

Anybody can allow themselves to become creative, and every idea is a worthwhile one.  This well-written guide to Imagineering constantly speaks of how seemingly impractical ideas can lead to wonderful attractions, because the Imagineers banned the word fear and used their imagination, not hesitating to share even the dumbest sounding ideas.  A helpful book, The Imagineering Way can turn timid people into inventive Disney Imagineers. 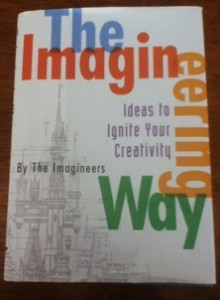