On December 30-January 5 the kids and I did our first Disney holiday trip (my husband stayed home as we own a business and he runs it.) We’ve done Spring Break a couple of times (and are returning March 30 for our next trip) and a couple of July 4th trips, but no Christmas holiday break trips yet. My daughter, age 11, had been going through serious Disney withdrawal, had watched the Disney special on the Travel Channel and was fascinated with the Osborne Festival of Lights.  On our agenda was to get over to the Studios to see them, but first we had to see all of the New Years Eve fireworks at all of the parks. On December 30 we went to the Magic Kingdom where they showed the holiday “Fantasy in the Sky” and were out until 4am in the parks. On the 31st we slept in and went to Epcot where we saw the first showing of Illuminations. Then we walked to the Studios and saw Fantasmic and the New Years Eve fireworks, where they had an awesome rock concert and “new” fireworks to us Disney veterans. Unfortunately it had rained on the 31st and the lights were not dancing. It was still a “wow” moment to see the lights although many were out because of rain. My daughter was a bit disappointed but I told her we would go back to see the lights.

Things got pretty cold at Disney on January 2 and 3 and there was no way I was heading to the Studios just to stand out there and look at Christmas lights, so we finally got back over there on January 4 as it had warmed up and we could put the gloves and winter coats back in the car. The whole time we were at Disney, my daughter kept asking how someone got to throw the switch on the lights. I told her that I didn’t know, and she was probably too old and they picked cute little kids. I had told her that she had her fifteen minutes of fame and cuteness when she was on stage with Diamond Jack at the Diamond Horseshoe Jamboree when she was five in 2002.  After a fine lunch at the Brown Derby and some attractions we moseyed our way over to the Streets of America to check out when the lights would go on.

I tend to be a bit outgoing and sociable (heck, you can’t really book Disney vacations for other people as a full-time job unless you make lots of new friends along the way and before I did this job I worked in human resources management) and the area where the lights were was pretty quiet without a lot of guests. I found a Disney Cast Member (Jen) and asked her about the lights and when they would go on. Of course my kids were just mortified because that meant Mom was going to stand there for ten minutes and get some sort of inside scoop on the lights and ask questions. Jen was with a manager-type CM, and he asked if we were going to be around for a while. I told them that we had been there all week and on NYE the lights were not dancing because of the rain, and I really wanted to stay there long enough to see them turn on and run through the first set. Last year I had seen them on YouTube and I had to see them this year in person. The manager guy asked if we would like to be the family that “threw the switch on five million lights” and of course I said YOU BET! My daughter didn’t quite understand what I was doing, but I told her that she and her brother would be on the little platform and would be the kids who lit up the Studios that night. She was jumping up and down with joy, and even her 13-year-old brother seemed to be holding in his enthusiasm to do this.

We were told to stay around the immediate switch area for a while as they had to wait until it was dark enough to get the lights going. Within about 20 minutes the guy who does the lights at Downtown Disney and the Studios came over and told us what was going to happen. We would be brought in the roped-off area, they would start the radio recording of the “show,” and he would cue the kids when to flip the switch and turn on five million lights.

A PhotoPass photographer was put in his own roped-off area to record the entire event too. I stayed outside the ropes as the view of the kids was better; plus, it was “their” show.

Finally they started the recording that tells the history of the lights. I’m snapping lots of photos, as is the PhotoPass guy. The kids have their eye on our Cast Member who is telling them to flip the switch. They start counting down and then the kids raise the switch and they’re on: five million lights! (There really are five million lights this year, synchronized to music. The lights do their dance about every 20 minutes.) DD just stood there in awe, while her brother tried not to be too impressed, but I could see his eyes light up.

We visit Disney quite a bit and have seen and done a lot there, but it really was a thrill to be able to have this particular “Magical Moment.” 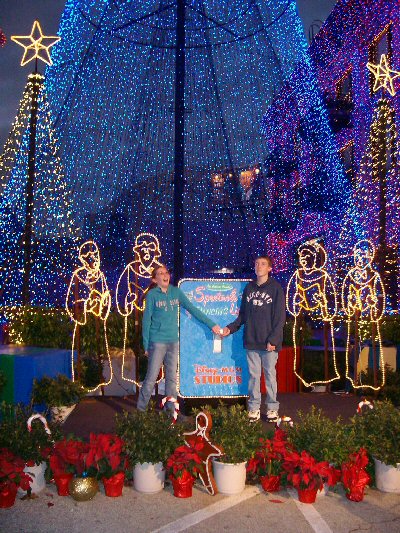