One memory I have is kind of silly, but it was a magical moment for everyone involved.  This memory is from our June 2009 trip to Disney World.  It was hot.  I am from Houston, so I feel like I have a certain heat tolerance that people from other parts of the country don’t have or understand.  But the heat stands out in my mind from that trip, or maybe it was more humidity.  If you have been in the South in July or August, you know what humidity really is.  We had sweat dripping down our backs from the moment we walked out the room in the morning until we showered at night.  It was great.  Just kidding!

So anyway, on day 2 of our trip we were in Hollywood Studios and we just needed to be inside for a little while to cool off and what better way to do that than go to The Magic of Disney Animation?  (We had already been to the baby care center for a break.)  As we approached the line we quickly discovered that we had just missed a show starting by a few minutes and would have to wait for the next one.  The only good thing about this situation was that we were in the shade on off of the hot pavement.  We were the first in line for the next show and while waiting we made small talk with the CM’s gathered around.  The next thing we knew, my 18 month old nephew had walked under the chain and over to a broom and dustpan and was attempting to “clean up.”  The CM, Sebastian, who had left it out of the way (or so he thought!) started to laugh and talk to Ryan, letting him sweep to his heart’s content. 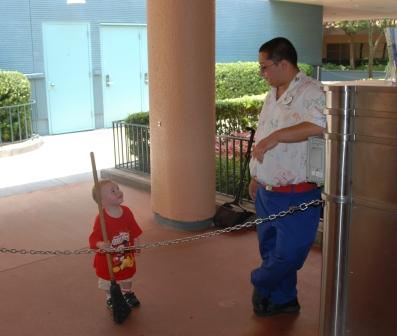 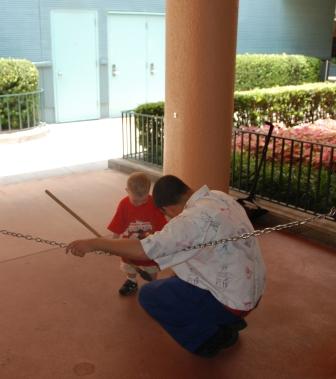 The time went by a lot more quickly with this added entertainment and as the minutes ticked by the line steadily grew to a modest length.  Shortly before we were to be let into the show, Sebastian reclaimed his broom and dustpan and politely excused himself to go back to work, or so we thought!  The next thing we knew he was coming out of a side door, opening the chain that Ryan had walked under earlier, and invited us to join him in the studio.  We walked in just as the previous show was exiting.  Sebastian had us sit in the front row and then he invited Ryan and my two kids onto the stage to check out the set.  (Thank goodness that everything is glued down up there!)  Then as the people who had been waiting behind us came in and sat down, Sebastian gently asked the kids to go sit down for the show.  At this point I thought that Sebastian would leave, but no, he was the artist doing that show!  He talked directly to us and even asked the kids to make choices when he needed them.  That was the day that we learned that you don’t always know who you are talking to and at Disney World that can be magic!