Meeting the Disney characters is almost always magical moment for children, my daughter is no exception.  Sure, some shriek and run in terror at the sight of their life sized heroes, but Kara has loved them from first sight at 9 months old when we took her to Disneyland for the first time.  From the dozens upon dozens of characters that she has had the pleasure of meeting over the years; three encounters stand out above all the rest.

The first encounter that stands out is from our October 2006 trip.  Kara was almost 4 years old and obsessed with all things Cinderella.  (I think Grandma helped encourage that obsession, but then I didn’t discourage it either.)  In preparation for the trip we read stories, watched the movies, and talked non-stop about meeting Cinderella.  My aunt even made her a special dress for her to wear for her first meeting with Cinderella.  The morning of the scheduled meeting, I dressed her up, fixed her hair and off we went to meet the princesses.  I absolutely love how the princesses make the little girls that meet them feel like they are the only person in the room.  Cinderella took Kara’s hand and commented about how lovely her dress was and then asked if she had a Fairy Godmother that made her special dress too! 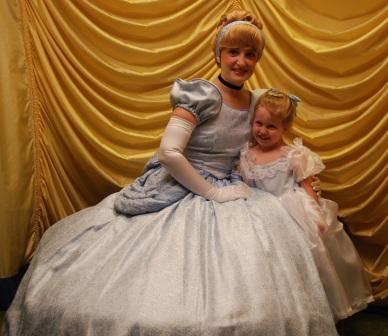 The funny part of all of this was a few minutes later.  As were walking out of the building, Kara started pulling on her dress and informed me that she was ready to take it off because she only needed to wear it to meet Cinderella.  Luckily I had thought ahead and brought the change of clothes that I anticipated needing at some point, I just thought she would have made it past 10:30 in the morning before she was ready to change!

The second encounter that comes to mind is the day Kara met the Fairies in June 2009.  I studied all the websites and made a plan for how we would “attack” Toontown for our second rope drop of the day in an attempt to have the shortest wait possible at the meet and greet location.  My research served us well that morning as we were at the front of the great stampede of people rushing to meet the coveted headliner characters at the Judge’s Tent.    We only had to wait for one group of people ahead of us in the Fairy line before we were lead down the “shrinking hallway” and into the Fairy Forest.  Now a little background here is that all this time I was under the impression that Tinker Bell was Kara’s favorite fairy.  I couldn’t have been more wrong!  She was properly impressed with meeting Tinker Bell, however when she turned and saw Silvermist, Kara got this faraway look in her eyes and whispered “oh Silvermist!  Mom, she’s my favorite fairy!”  I was caught off guard because that was most unexpected.  I almost felt like I had failed my daughter.  I should have known that it was Silvermist and not Tinker Bell that she longed to meet, but she had never mentioned it, and having never thought to ask, I just assumed that the Fairy icon was her favorite.  The look on her face in the picture taken by the Photopass photographer says it all. 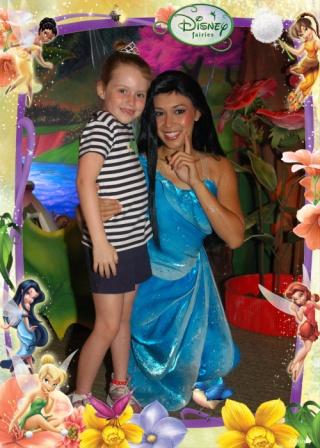 The third encounter involved Prince Charming, also from the June 2009 trip.  We were scheduled to have dinner one evening at 1900 Park Fare with Cinderella and family.  If you or anyone in your group is a Cinderella fan, I highly recommend the dinner buffet at 1900 Park Fare in the Grand Floridian.  Not only do you get to meet the ever popular Cinderella, but you also get to meet the Prince, the Step-mother and the step-sisters (like Disney warns though, this could change on any given evening and all of the characters are not “guaranteed” to be there).  As the characters were making their rounds and entertaining the room, around came Prince Charming, and charming he was.  Kara was smitten and obviously embarrassed at her meeting with the prince. 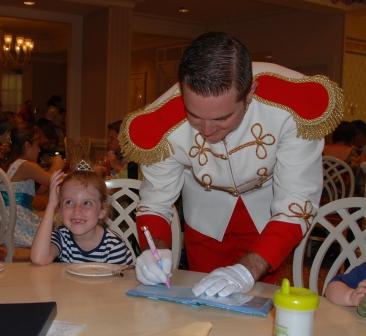 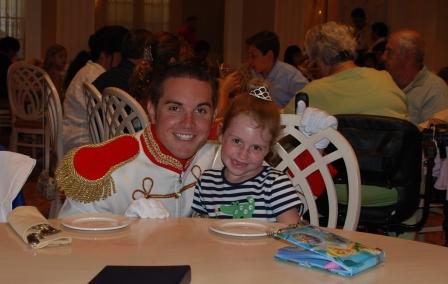 She did recover though, and later had a brief waltz with him in the middle of the dining room.  Unfortunately it was sudden and so brief that by the time my dad scrambled for the camera the moment was over, but I still have the memory in my mind of her looking up at the prince like she was the only princess in the room.  Only at Disney World are moments like these possible!