A little bit of Pixie Dust goes a long way and truly is magical.  My daughter has lost a tooth during our last two trips to Disney World and while there is no way to plan this, it turned into a magical moment thanks to her loving aunt (my sister) and a little bit of Pixie Dust on our last trip.  So on this particular morning we were in the Magic Kingdom for a breakfast ADR when my daughter announced that her tooth was bleeding.  Now I did know that it was loose, but I was completely unaware that it was that loose.  Although she denied it, I think that she was working it loose so that she could say she lost another tooth at Disney World.  Anyway, my sister swooped in immediately to inspect the loose tooth and declared it ready to come out.  I kind of peeked in and noted that it was loose and while I thought it had another day or so to loosen up some more, I really left up the decision to Kara (my daughter).  She was a bit nervous but told her Auntie G to pull it.  I encouraged them to go to the nearest restroom so that other passersby would not have to be subjected to what could become a crying mess at any moment.   Heeding my suggestion, Auntie G and Kara went off hand in hand looking as if they were on a mission, and I guess they were now that I think about it.  The rest of us settled on a nearby bench to people watch as we waited in anticipation for the lost tooth.  A few minutes later they returned, Kara with her eyes a little teary and Auntie G with a huge smile plastered across her face.  The tooth was safely wrapped in tissue and put in a baggie, (thank you First Aid!) and Kara had another baggie of ice for the sore spot.  I thought the show was over, but Auntie G had one more trip up her sleeve.  She told us to stay put and that she had to go do something.

Honestly I was a bit irritated because the tooth was pulled and I was ready to go see about our breakfast ADR, but by this point Kara was telling us her side of the tooth pulling story and I figured a few more minutes would not make a difference.  We sat and let Kara give us the gory details and as she was spinning her tale she did not notice Auntie G sneak up behind her and sprinkle her head with Pixie Dust.  As it floated down around her, Kara looked up with wonder in her eyes and squealed with delight.  My sister told her that as she was coming back from the restroom she ran into Tinker Bell who was in a bit of a rush and while she had hoped to see Kara personally at the First Aid station, they had left too quickly.  Tink gave my sister a sprinkle of Pixie Dust and a magic wand with candy with instruction for Auntie G to sprinkle Kara with a bit of magic and give her the wand as  congratulations for losing a tooth at the Magic Kingdom.  That was a magical moment unlike any other and to this day Kara still talks about how the Pixie Dust is magical, because as we later found out, no amount of swimming or shampoo can remove it!  Kara had Pixie Dust in her hair for the rest of the summer and that made her a believer of what we now refer to as “Fairy Magic.” 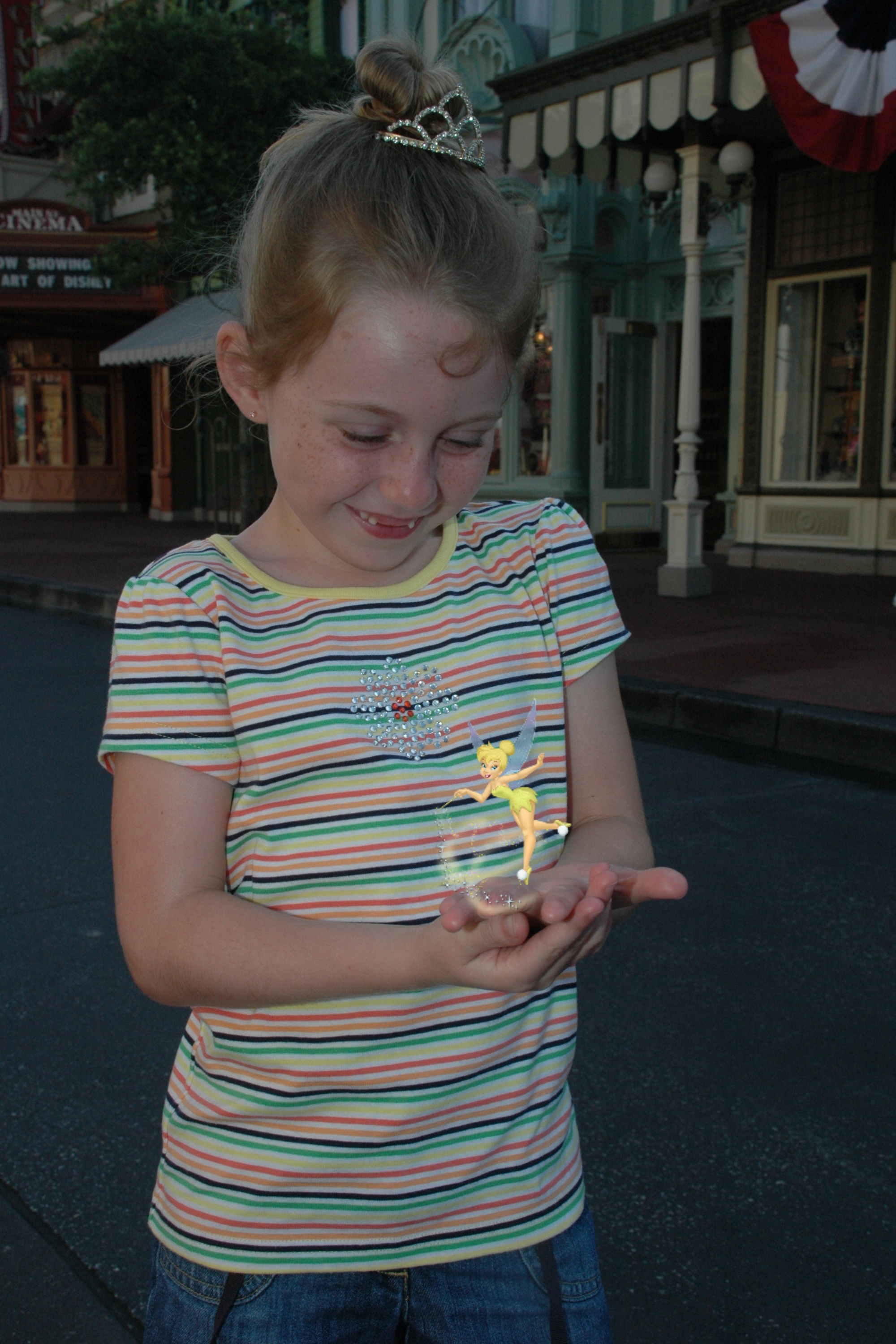 The picture I have put in this blog was “pre-Pixie Dust” but I thought it was quite appropriate for the topic.