Someone recently started a thread on the MouseForLess Yahoo group about Pin Trading at Disney World and it got me thinking about buying some pins for my upcoming trip in June.  I always see questions popping up wondering when children are old enough to trade and who or where to actually trade the pins with.  As for when a child is old enough, I think this is subjective and really depends on the individual child.  My first experience with Pin Trading was in 2006 when my daughter was almost 4 and my son was 15 months old.  Now for obvious reasons my son didn’t get into trading and while I wouldn’t say my daughter got into it, she did enjoy the trading aspect of it.  I had purchased about 25 pins on Ebay with the thought that it would be a fun diversion if it worked out.  I had no idea how big of a diversion it was going to be.  You know how every attraction at Disney World exits through a carefully themed gift shop?  Well how many children go through said gift shops with the gimmees?  I would venture to guess most children find something that they “have to have” at least a few times a day.  As a parent I can fight the battle or give in to the whining (as Disney hopes you will do).  Giving in is not an option for me because we do travel on a budget.  This is where the pin trading came in as a life saver.  I put a few pins on my daughter’s lanyard and told her that we would trade them for different pins when we saw one that she liked.  Of course she didn’t fully understand the trading explanation at first, but after we found a Cinderella pin that she liked on a Cast Member’s lanyard and traded it for one that she didn’t care about, that is when it clicked and she got into it.  All of a sudden she was on the lookout for pins that she wanted to trade for.  I did put limits on her trading and told her that we weren’t going to trade with anyone except the people that worked at Disney.  We are not serious pin traders and I have no clue what any individual pin may be worth so I am not going to even begin to trade with the people who take this seriously.   When we left Disney World after our five day trip, my daughter had successfully traded all of her pins at least once and a few were traded more than once.

Our next trip was about 18 months later.  My daughter was now 5 years old and my son was almost 3.  This trip included a few cousins who were 6 and 8 years old.  I decided early on that pin trading was going to be an activity that everyone could participate in and have fun with.  Again, I went on Ebay and bought a lot of pins for trading.  I gave everyone 10 or 11 pins, explained it to the cousins and we were off.  At this point all of the kids had favorite Disney cartoons or characters and they each had a different theme that they were after.  My 8 year old cousin wanted Winnie the Pooh characters.  My 6 year old cousin wanted all Chip and Dale.  My son (with help) was looking for Cars characters.  My daughter was a little broader in her search and was looking for the Princesses and Tinker Bell.  We had fun trading on that trip and the girls really got into the trading.  So much so, that they almost forgot about asking for souvenirs, I said almost!  They were so busy looking for their pins that they didn’t focus on the toys in the gift shops, instead they were looking for Cast Members wearing pin trading lanyards.  We had a few Magical Moments that trip as well.  We were walking through the lobby of the Beach Club on our way to Beaches and Cream when one of the greeters approached the girls and handed each of them a card with 2 Tinker Bell pins on it.  The card explained that one was to keep and one was to trade.  The girls were thrilled to have more pins to trade!  One morning while we were waiting for rope drop at Epcot, an older couple struck up a conversation with my 8 year old cousin.  She was wearing a “My First Visit” button and the couple ended up giving her a pin to trade since it was her first visit.  And then, on our last morning in the Magic Kingdom, we were going into Buzz Lightyear when a Cast Member approached the girls and asked what pins they were looking for.  She told them to wait a minute and she disappeared for a bit.  When she came back she gave each of the girls a few pins each that matched their theme. 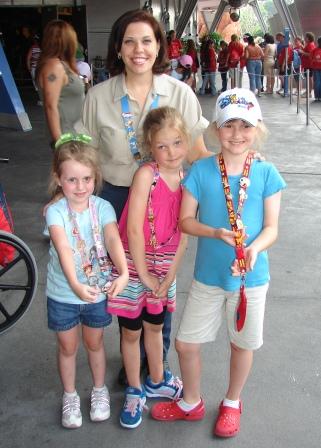 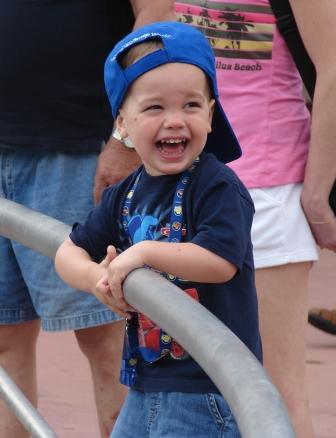 Our next trip was the following year in 2009.  My daughter was 6 years old and my son was almost 4.  This time they knew the drill and they were ready to trade!  My son stuck with looking for Cars pins, although he did look for Buzz Lightyear and friends too.  My daughter was still looking for Princesses and Tinker Bell for the most part, but there was special pin that she was on the lookout for.  On our first morning, we were in Epcot and we passed the Pin Trader cart.  My daughter slowed down to look and when she did she saw a Marie pin that she just had to have.  I looked at the pin and almost bought it for her (for $7.95!).  But then I had a thought.  I told her that I wasn’t going to buy it right then.  I wanted her to look for it while we were in the parks and if she didn’t find it to trade for by the end of the trip, I promised I would buy it for her.  That gave her a mission and she took it seriously.  I thought that it would keep her busy for the rest of the trip and I would end up buying her a Marie pin before we left.   Wrong!  The next afternoon she found a Marie pin to trade for! I really do not know if it was the exact one she had seen before, but she did not seem to care.  I think the pin was even more special to her because she had to find it instead of mom just buying it for her.  She still looks at that pin and remembers how she had to search for it.

For our upcoming June 2011 trip I am trying to talk myself into buying a 100 pin lot off of Ebay.  We are going to be at Disney World for 8 days so I am thinking that we are going to need quite a few to keep the kids busy trading.  My son is still talking about Cars and Buzz Lightyear pins so I sure that is what he will be looking for, although I would like to see him branch out a little.  My daughter hasn’t settled on any one thing, but she has said that she would like to find some different Marie pins.  My husband is going on this trip and he wants to look for Stitch and the Seven Dwarfs.

If you think that pin trading is something that your children may enjoy, I suggest starting small.  It really isn’t for everyone.  Some kids don’t understand the trading aspect of it and the fact that they do not get their original pin back.  Approaching someone to trade can be unsettling as well.  I suggest making it a rule to trade only with the Cast Members.  Cast Members will always trade with children and they let the kids pick which ever pin they want.   You can trade with anyone who has a lanyard who is willing to trade, but some people are serious about their pins and it could be a less than positive experience for the child who can’t trade for the pin that they want.  Another helpful tip is to bring a quart or gallon size zip lock bag to keep the lanyard in.  My kids don’t walk around the park with their lanyards on for multiple reasons.  First it can be heavy and rubbing on the neck can get irritating after awhile.  Another problem that we have had is that the back can fall off and then the pin can get lost.  When the kids see a pin they want to trade for, I pull out their lanyard and put it around their neck.  They make their trade and attach the new pin to their lanyard.  I let them wear the lanyard for a few minutes and then put it back in the bag for later.  Disney does sell locking backs for the pins, but they can be costly so we don’t use them.  Another word of advice is to leave the “keeper” pins at home or in your room.  No need to bring them to the parks and risk losing them.  Finally, if you do chose to buy your pins online before you go on your trip, do some research, actually do a lot of research and check feedback of the person you are buying them from.  If it seems too good to be true, it probably is, so be careful!  A safe option for beginners is to buy a starter lanyard at your resort gift shop or at the front of the park on your first day.  A starter pack comes with the lanyard and four pins and runs about $25.00 for the set.  The Disney Store (online too) sells pins on clearance every now and then.  Remember, it doesn’t matter what the pin looks like, you are going to trade it away so go for cheap!

Well, I am off to buy some pins.  Happy trading!