On a recent trip to Disney World for the Princess 1/2 Marathon I had the opportunity to spend a day in the Magic Kingdom. The crowds were low
and the lines were short so I had plenty of time to play a round of the new game, Sorcerers of the Magic Kingdom. I with my running buddy, Kerry, and after lunch we were looking for something to do so I suggested that it was time to give the game a try. We strolled over to Main Street and found the Firehouse where the recruiting for the game takes place. 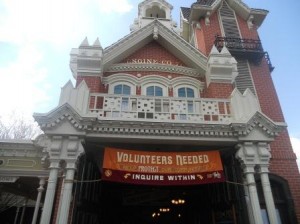 Lucky for us we chose a slow time to arrive and there were only a few people in line ahead of us. The process to get the game cards is a little
slow and you can tell that the Cast Members are still in the learning phase. While waiting in line we had time to read the recruiting posters and watch a short video where Merlin tells you that he needs help in the Magic Kingdom. Leave it to Disney to make waiting in line part of the entertainment! 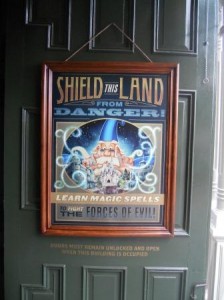 After a few minutes a Cast Member invited us to the counter where we began the check in process. She asked us if we wanted to play together or
separately. We chose separately because we wanted 2 sets of Spell cards and that was the only way to get them because you are only allowed one set of Spell cards per day per park ticket. The Cast Member took each of our park tickets and swiped them in the same way that you would swipe a credit card. She then activated two sets of Spell cards and gave us each a park map with all of the secret portals labeled.

Next we walked over to what looks like a horse stall. 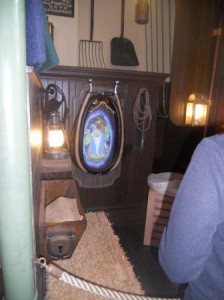 We were instructed to hold our key card up to the key hole.

Since we were playing two games we each had to do this individually. The video seemed well done, but the CM talked over the video and it was hard to listen to her give directions and listen to the set up for my mission. I think this is where the CMs need a little help. They should
give the guest a moment to watch the video and then ask if there are any questions.  My mission had the Pocahontas characters in it and Kerry’s had Tiana from the Princess and the Frog.  The video ends by telling you were to begin your mission. Even though we were playing separate games, Kerry and I both ended up with the same location in Liberty Square for our first stop. We thanked the CM and headed off to that location. 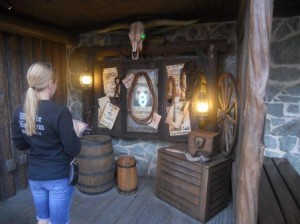 The portals are marked on a map with a symbol that doesn’t seem to match up with anything in particular.  Walking into the general area it is pretty easy to guess where you need to go, you only need to look for the line of people holding maps and waiting in front of a random window.  They aren’t very secret!  At one point we were looking at the map discussing where to go when a CM walked up to us and pointed us in the correct direction.  Nice of her, but again, it kind of ruined the secretive nature of the game. 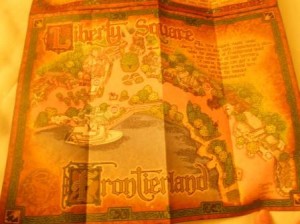 Kerry and I had to coordinate with each other where we would go next as we were trying not to jump around too much.  Playing 2 games simultaneously  was okay for us because we were both in Frontierland and Liberty Square, but if one of us had gotten another land we
would have had to take turns playing the game to completion.  Logistically it wouldn’t work to play one game in Frontierland and one in Fantasyland at the same time, unless we split up.

At one point I noticed two guys playing the game together.  They each had three ring binders with those see through pocket pages that are used for baseball or Pokemon card collectors.  I watched them play their round and at the end of each little video you are prompted to hold
up a spell card.  These guys held up their notebook pages and were able to cast multiple spells at once.  I was intrigued by their large collection of
cards and the fact that somehow they knew that they could play more than one spell card at a time.  Before they walked off I politely stopped them and we chatted for a few minutes about the game.  It turned out that they were Cast Members themselves and on their time off they have been coming into the Magic Kingdom to play the game.  I expected that they would be a the highest level of the game, but they said that they
were only at the second level.  I found this a bit surprising and it made me think that they average guest will never make it to the highest level of the game if this is the case.  The CM told me that he is only allowed one set of Spell cards per day,  just like anyone else and that he had been playing almost everyday  for two weeks!  He also said that he had not yet acquired all of the Spell cards, that he still needed to get the rare cards which he said are pretty hard to find (rare!). 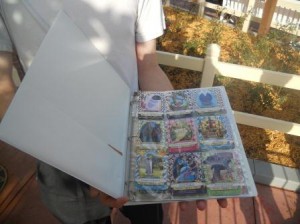 From start to finish Kerry and I invested about one hour in the game, from picking up the cards to playing through one mission.  At the end of our mission we were invited to continue on to another new mission, but we would have had to split up and go to different lands to play so we decided not to continue at that point.  Had we changed our mind later all we would have had to do is walk up to any keyhole and hold up our keycard and we would have received a reminder message about where we were supposed to start the next mission.  Any game can be suspended and picked up later in this way so if you are in the middle of a mission and need to go to an ADR or use a Fastpass, no worries, you can pick up where you left off at any time.

Overall I found the game entertaining, but not very intriguing because a few times the person in front of me or Kerry had the same message so we already knew what it was going to say.  The only difference was that everyone has the option to cast a different spell to conquer the villain, but the video pretty much ends the same way regardless of the spell cast.  Also, waiting in line kind of took away from the secretive nature of the game.  I
could see how sneaking around at night would be fun, but only if you weren’t constantly running into other people doing the same thing.  I am also pretty sure that I wouldn’t want to spend a lot of time on the game if this was a first or only trip to Disney World.  The game is definitely better for frequent visitors who may want to avoid lines at attractions or try something new.  Very young children may not have the patience
to play along but they will probably enjoy seeing the characters on the videos and playing with the cards.

I will be interested to see what other people’s opinions and feedback are as time goes on.