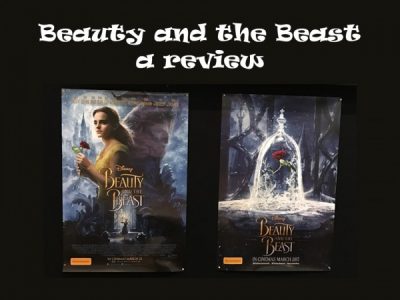 It may be a tale as old as time, but Disney’s new live-action Beauty and the Beast is far from dowdy. The box office numbers from both the US box office sales and international ticket sales have been outstanding; but the reviews have come in on both sides of the ‘go see it’ or ‘don’t’ fence. So, should you take your kids to see this new, live-action film? Here’s my family’s take on the movie.

The only word I could think of as the end credits faded on our screen was ‘sumptuous’. Everything from the costumes and sets, to the acting and improved dialogue benefited from the live-action adaptation. There are four new songs that deepen the story and emotions of the feature. Scenes were reworked to improve the flow and fill in several plot holes from the original animated version. You will also learn a bit about Belle and Beasts childhoods. A lot of study went into the feel and visuals of this new movie and this helped with placing the behaviors of the characters.

Overall, this is an outstanding tale. Okay, it’s true that I am a huge fan of La Belle et la Bête, so I have a soft spot for Beauty and the Beast; but with this new feature, Disney has shown that their little musical is a contender with some of the deeper versions of the story.

There has been a lot of controversy about this movie upon its opening. Perhaps you have heard that Belle is not the demure little girl so commonly seen in Beauty and the Beast stories (but with Emma Watson headlining as Belle, who is surprised by this?), or Ms. Watson’s singing voice was autotuned during parts of some songs. These are true observations. Though the first is an empowering and poignant use of a ‘princess movie’ – I am reminded of the self-rescuing princess movement here – the autotuned voice lacks the dimension and opulent quality of the other voices and the orchestration of the rest of the movie. Do not get me wrong, much of Ms. Watson’s singing is well rounded and within pitch, but there are just a few places that might bother those with musically sensitive ears.

The other controversy laid at the feet of this movie is the handling of ‘the first gay Disney character’. Sadly, this one statement has brought many people to question if this movie is right for their family. No one can tell you if a movie is appropriate for you family or not and I am only giving you information to help you judge for yourself. I honestly think that this statement might have been overstated. Have you seen the animated feature? If you are concerned and a younger member of your family has been pining to see this movie, perhaps an adult who knows your family and whom you trust could see the film first. This movie does touch on the importance of tolerance and looking on the inside of a person to find their beauty and love. I always try to focus on the positive aspects of a movie when I take kids with me and what a wonderful moral for children to learn. It would be a shame to pass over this movie and find out later that the story would have been a perfect fit for you.

Is This Movie Right for Your Family?

The live-action version of Disney’s Beauty and the Beast is rated PG in the United States, UK, Australia and most of Canada. The movie receives this rating due to ‘some action, violence, peril, and frightening images’. There are, as one would expect, several fight scenes and one character is shot three times (don’t fret, it is a Disney movie). Like in the animated feature, there are animal attacks and one character is injured. No blood is shown in this feature but you will see the red marks left by the animal attacks. Also, it was pointed out to me that the ‘dark, scary, forest scenes’ are better lit in this version of the film; however, it is important to point out that these scenes may still be too intense for young or sensitive viewers.

The movie clocks in at 129 minutes, so it is much longer than the animated feature. Everyone in our full cinema was older (the youngest perhaps 10 years old) and no one seemed fidgety, but this might be something to consider with younger family members. If you are not sure if your child is ready for stylized war scenes, perilous scenes where beloved characters could plunge to their deaths or be eaten alive by predators, or several dark, startle scenes, then this might be a ‘watch at home’ movie. Like I said above, if you are not sure, perhaps employ an older sibling, aunt/uncle, or a close friend to check it out before you go.

If you go to see Beauty and the Beast or you already have, let us know how you liked it in the comments section. As for me, I think that I will go see this gorgeous spectacle again tomorrow. Who knows. I just might see you in the movies.