I learned that I was pregnant the day before my Christmastime trip to Disneyland, and my husband and I spent pretty much the entire trip marveling at our good fortune, pointing at all the cute kids we saw in the parks, and looking for snacks that wouldn’t make me nauseous. Once I got a burst of energy in the second trimester, we decided to take a “babymoon” roadtrip to Disneyland in the spring — a trip for just the two of us, pre-baby — in which I thought we’d probably run around like teenagers let loose in the park, reveling in our temporary free time. (I was a little optimistic about my second-trimester energy burst.)

We did that for a little bit, and then I really learned to appreciate all of Disneyland’s convenient benches scattered throughout the park. What I discovered on our trip was that even though we were technically still just a party of two, our third family member was always on our minds — and those of many pleasant, excited Disneyland-goers, too — which let me appreciate my favorite, familiar vacation spot in an entirely new and unexpected way.

I have gotten to appreciate Disneyland as a kid, in all of its wonders and its crushing disappointments: I clearly remember both shyly approaching my favorite character, while wearing her matching dress (either Snow White or Alice, depending on the day). I also remember the humiliation of a Cast Member approaching me, the sole rider in my teacup, to ask how old I was. (I had just turned seven, the age in which you can ride by yourself, and I couldn’t believe someone could think I might be only six years old!)

I have also gotten to experience Disneyland as a teenager, when my parents would somehow find it in their hearts to let a friend come with us on our annual summer vacation (we had to go in the summer, since they were both teachers). I don’t know how they made it all the way from the Bay Area to Anaheim on I-5 with two giggly, squealing, inside-joke-making teenage girls in the backseat, but they did, year after year. I remember being aghast when, after a long day in the parks, they’d declare they wanted to go take a nap or even just ride the train around for a while! Fortunately, they let my friend and I roam the park on our own while they rested. I think they must have thought of my friend as a kind of insurance policy for their aching feet — they were happy to let us two go off by ourselves, so long as we would return back to the hotel on time. As much as I now appreciate my parents, I vividly remember the exhilaration of waving goodbye to them as they headed toward the exit, usually just after the fireworks ended, while my friend and I grinned at each other, overwhelmed with our sudden freedom. Being fifteen and let loose in Disneyland park until closing time, at the beginning of summer vacation — how could life get much better than that?

But then I got to experience a whole new sense of discovery, when my college boyfriend (now my husband!) introduced me to the wonders of visiting Disneyland in the off-season. Walking down a near-empty Main Street at three o’clock on a mid-week September afternoon was like entering some kind of fantastic dream. We bought our first annual passes my first off-season day, and have gotten them every year since, but I really don’t think I could ever recreate my total astonishment at the first time we were seated in Indiana Jones jeep as the only riders. The lack of crowds made it a whole different park to discover together.

So, on what we had planned to be our last trip before we officially became parents, I thought we might recapture the wild freedom of my teenage visits, or the joys of rediscovering hidden New Orleans Square courtyards or Main Street details like we did when we first got our annual passes. And of course, a high priority was me posing in photos standing sideways, so our newest family member could still be “seen” in the form of a very round bump.

What I was surprised about, though (although there were delightful moments from all categories), was not just that I viewed Disneyland as a parent might, but also that other parents were already viewing me as one of their kind! I couldn’t have predicted that — I was so caught up in wondering which of my past memorable Disneyland experiences I’d be recapturing that I hadn’t really thought about the new ones that might happen. 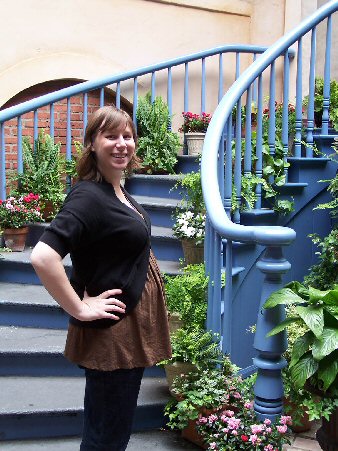 Me “plus one” in New Orleans Square.

But suddenly, I was getting some extra friendly and sympathetic smiles from moms passing by as I was plopped on a bench, or waiting in line for the restroom. Teenagers running through the crowded area in Adventureland, where the Indiana Jones queue often causes a massive bottleneck near Tarzan’s Treehouse, stepped out of my way when they saw my stomach headed toward them. And, most of all, other guests would strike up conversations with me about parenthood — even those who couldn’t yet tell I was pregnant. It was like I was magically attracting helpful, friendly strangers who were excited to share with me their stories of being parents in the park.

In one such case, I had plopped down on the blacktop in California Adventure, glad for the chance to let my legs stretch out, waiting for the Electrical Parade to start while Brad went in search of popcorn. It was dark, and I had a coat on (although it was a stretch to get it to close). A family pulled up next to me, with a little kid in his stroller, and the kid started to play with a stuffed monkey — and then wanted me to play with it, too.

The mom, a little embarrassed once she saw the slobbery monkey go flying and land in my lap, apologized for her kid — but I gladly unzipped my tight coat and told this stranger that it was alright, and said that I was going to have one of my own pretty soon! She instantly shrieked with delight, told all the people she was with, and we talked until the parade started about pregnancy, and the delights of introducing a child to Disneyland, when the parents already love the place. She told me with no little sense of pride that her son’s favorite character was Mickey. (An un-trendy, classic, tasteful choice.)

As she retrieved the drool-soaked stuffed animal from my lap, she continued to tell me about all the things her baby had been able to notice on his many different visits, and how much more she appreciated the park as her baby grew. I listened to her, wondering how it would be for us.

The next day, we rode Soarin’ Over California — one of the “thrill rides” I was looking forward to being able to go on. A single rider was in line next to us; she was in her fifties, I’d guess, and wore a sticker on her sweater that declared it was her first visit to the park. She asked us what the ride was like — she was a little scared to go on it, I think — and we asked how her first visit was, and got to hear about what was her first trip and also her three-year-old granddaughter’s. We talked until the ride started. “There’s just nothing like seeing this place through her eyes,” she said as we filed into our rows. I nodded, thinking that must be true but wondering what that would be like.

“Okay, now you’re sure this is a fun ride?” she asked nervously as the lights dimmed.

“I think so, but if you don’t like it, you can just close your eyes,” I whispered before the music started and we took off. My new friend literally squealed in glee and swung her legs all throughout the ride, even letting out an occasional whoop! I couldn’t help but giggle with her and also swing my legs a little bit, myself.

By the end of the ride, I thought that I had just gotten a peek of what it might be like to introduce the park to our own newcomer.

Somehow, all the talk about what we had to look forward to also helped pull me back to the present. I got to experience the once-in-a-lifetime thrill of feeling the baby kicking me on its first trip where it could hear my favorite attraction, the original Enchanted Tiki Room, in all of its musical splendor. Of course, it’s easy to let your imagination jump ahead to anticipating how the kid might react to the Tiki Room, or the fireworks, or meeting characters in person, once it’s actually born. That is part of being an expectant mother at Disneyland, I suppose, and a fun one. But it was also good to get a few little kicks now and then to pull me back to enjoying the present — and realizing that our trip that was supposed to be just the two of us was clearly for the three of us all along. 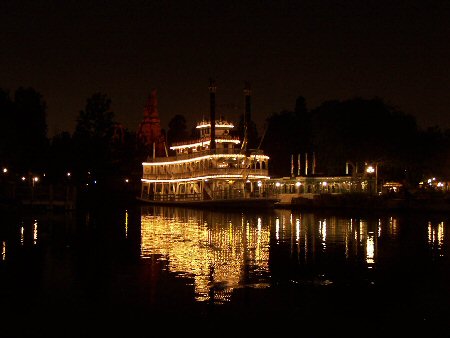 Baby’s first time hearing the Enchanted Tiki Room and the Mark Twain’s steam whistle are commemorated by some enthusiastic kicking!

My biggest surprise this trip was getting small peeks like that at a whole new way to experience Disneyland. I felt like I’d been welcomed into a private club for parents. OK, so it seems to have a lot more spit-up and naps involved than, say, Club 33, but also certainly seems like a club that’s going to make for some entirely brand-new memories. Just being an expectant mom in the parks has already given me yet another new dimension to appreciate our trips.