In each issue, we feature a magical memory submitted by one of our readers. We look forward to sharing your memories in upcoming issues! 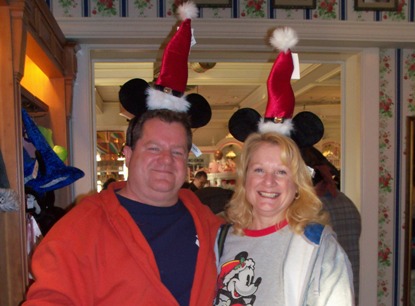 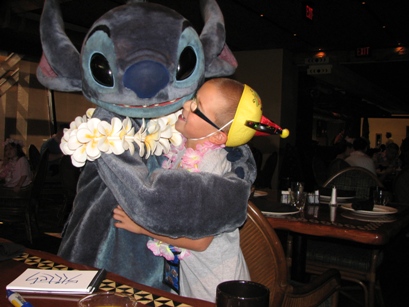 We just visited 8/21-8/27. It was the first visit for our 3 kids and our youngest celebrated his 7th birthday while there. Stitch was one of his “must meet” characters and boy was he happy to have breakfast with Stitch on his birthday! (Submitted by Traci D.) 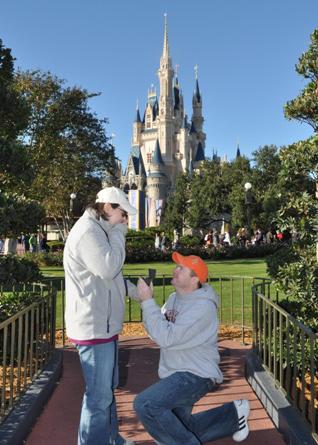 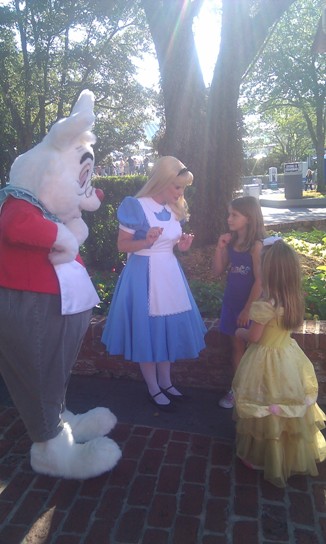 We just returned from our first WDW trip. We had so much fun, and made so many memories. From meeting all of our favorite princesses, to riding the Teacup ride with Alice and the Rabbit, to our daughter Kylie being chosen to talk to Crush!
(Submitted by The Criss Family) 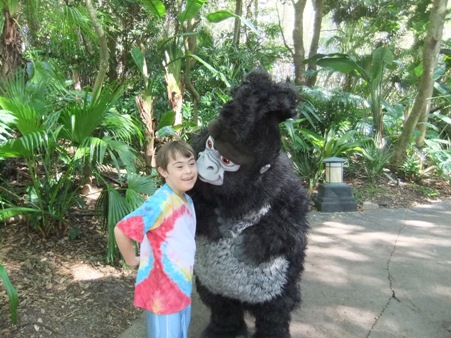 Our 9yr. old, Jesse. Love how the characters go out of their way to do something special for special needs children!
(Submitted by Larry S.) 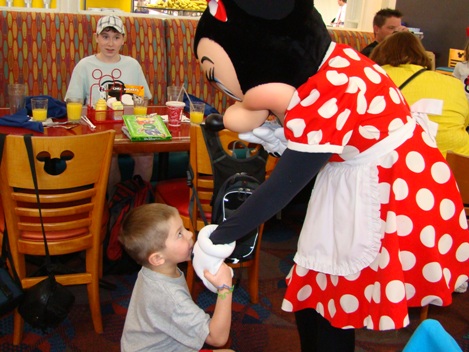 Here is a picture of my little prince stealing away a
little piece of Minnie’s heart!!
(Submitted by Nathalie J.) 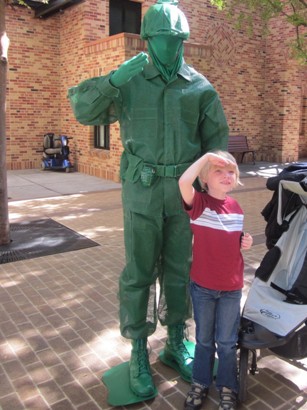 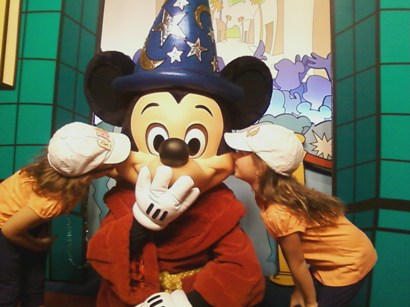 My twin 5yo daughters’ first meeting with Mickey @ Hollywood Studios.
Samantha is on the left, Alexandra on the right.
(Submitted by Matt D.) 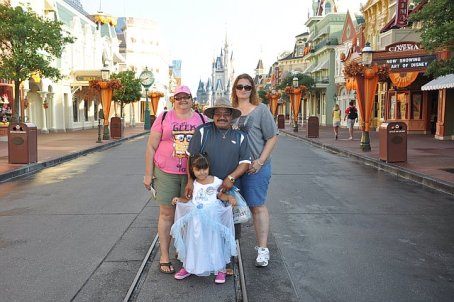 Sierra’s big day…she turned 5 and she was getting ready to have breakfast with Cinderella.
(Submitted by Lou T.) 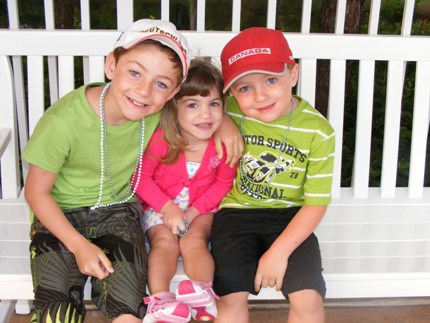 Waiting for the bus to Magic Kingdom on the first Day.
(Submitted by Shannon W.) 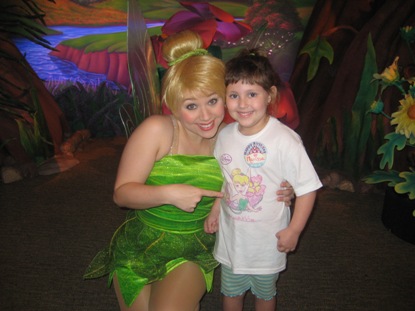 This past Christmas, my 4-year old daughter received a t-shirt of Tinkerbell that she could color herself and wear. She was VERY proud of herself for coloring within the lines so the shirt would look nice. When we went to Walt Disney World about a month later, she made a special point of wearing the shirt on a day that we visited Magic Kingdom and visited the fairies. Tinkerbell was quite impressed with the shirt and made sure to take this special pose pointing to herself on my daughter’s shirt! (Submitted by Kristie K.) 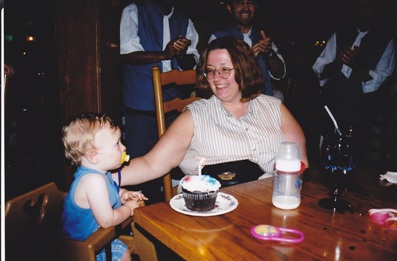 My son’s first birthday and first visit to Walt Disney World. I celebrated his birthday in
Liberty Tree Tavern in July of 2000. Just look at his expression! He turned 12 this month.
(Submitted by Donna S.) 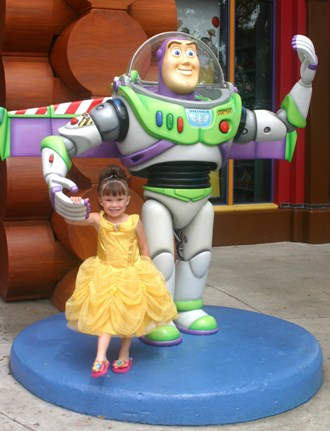 We just got back from our first family trip to Disney and I am so excited to
finally get to submit my own picture. This is of my 4 year old little
princess and the Man of her dreams! She never has gone for the
typical Prince Charming 🙂
(Submitted by Aubry M.) 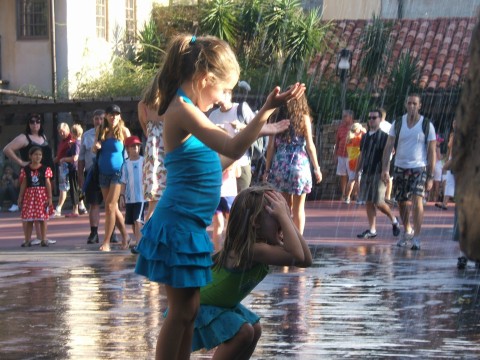 Big splash from Splash Mountain!
The girls couldn’t wait for every 3rd coaster to come down the mountain and
give that big splash as they waited on the bridge! (Submitted by Tracey S.) 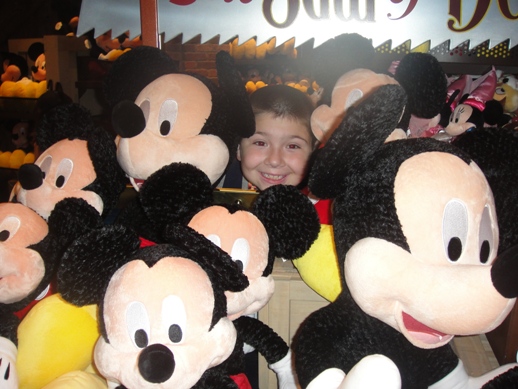 I love your photos of the week. My 8 year old is obsessed with Hidden Mickeys so he decided he was going to make himself one when we were in Disney World this past April. He goes hysterical every time he looks at this picture. See the magic of Disney puts a smile on our face everyday! ; ) 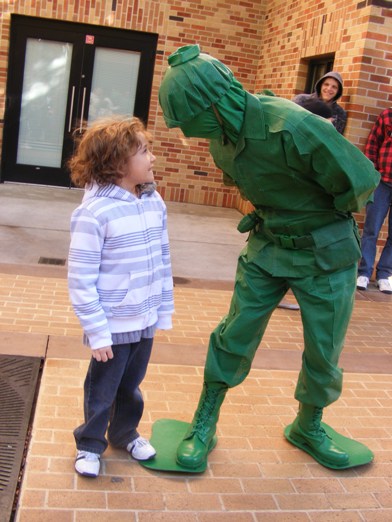 “Excuse me, do you know where Andy is?” 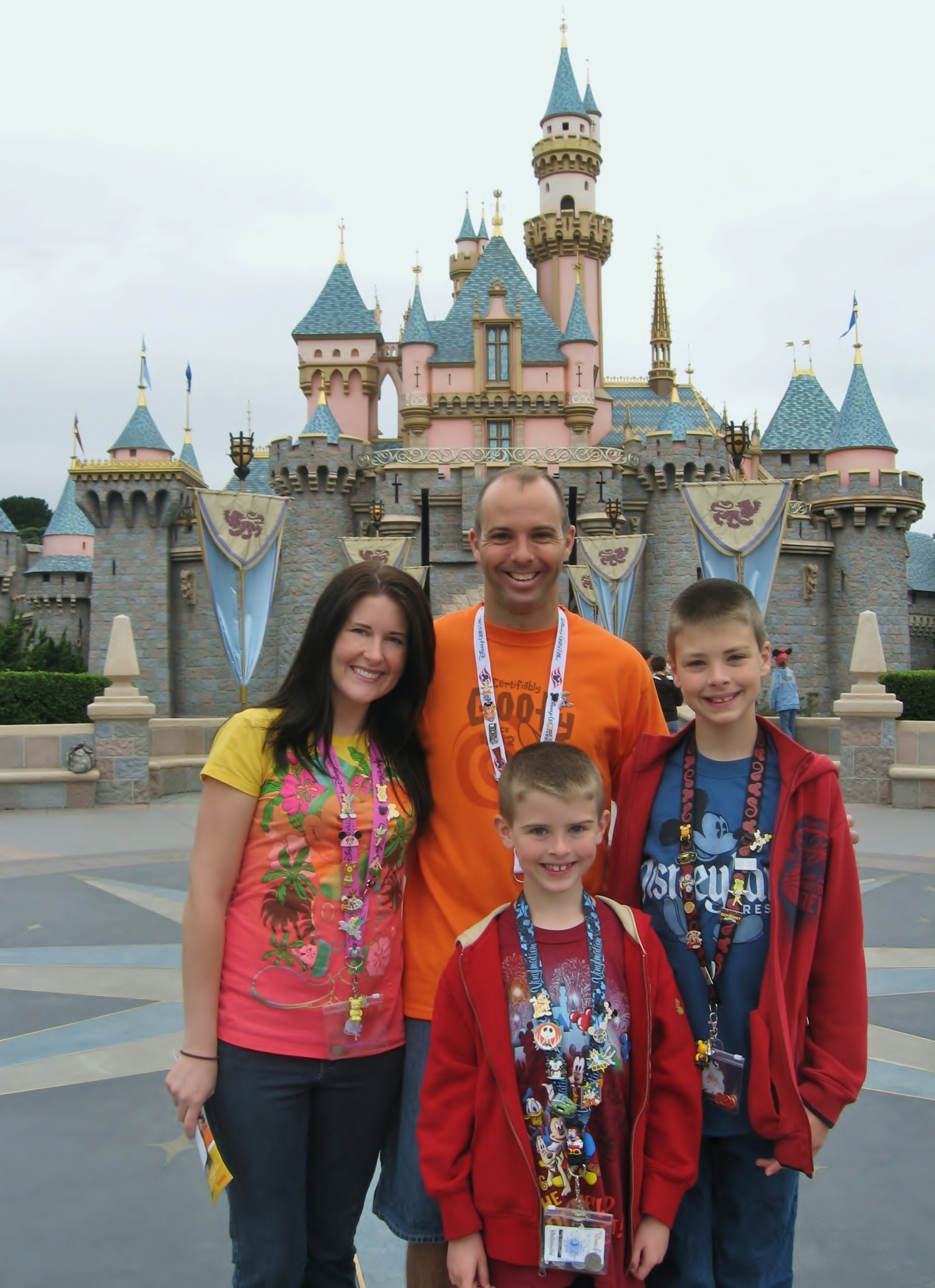 After many magical vacations to Walt Disney World, this year we decided to surprise our boys with a trip to Disneyland, California for Spring Break! Since we live on the east coast it has always been quicker and easier to travel to Florida. And, although we LOVE all that Walt Disney World has to offer (and consider it to be our home away from home), we have never been to CA and thought that it would be a wonderful experience to step foot in the park where Walt Disney himself once walked. What an experience it was too! From the moment my family and I walked through the entrance and read the bronze plaque mounted above the stone archway leading to Main Street, U.S.A. (“Here You Leave Today And Enter The World Of Yesterday, Tomorrow And Fantasy”), I was overcome with emotion as tears of joy welled up in my eyes! We are finally here! It was a moment that I will never forget! I am still partial to Walt Disney World, for it is where my love of all things “Disney” first began at age nine, but feel so incredibly thankful to have had the opportunity to visit the park that started them all, Disneyland.Tresha T. 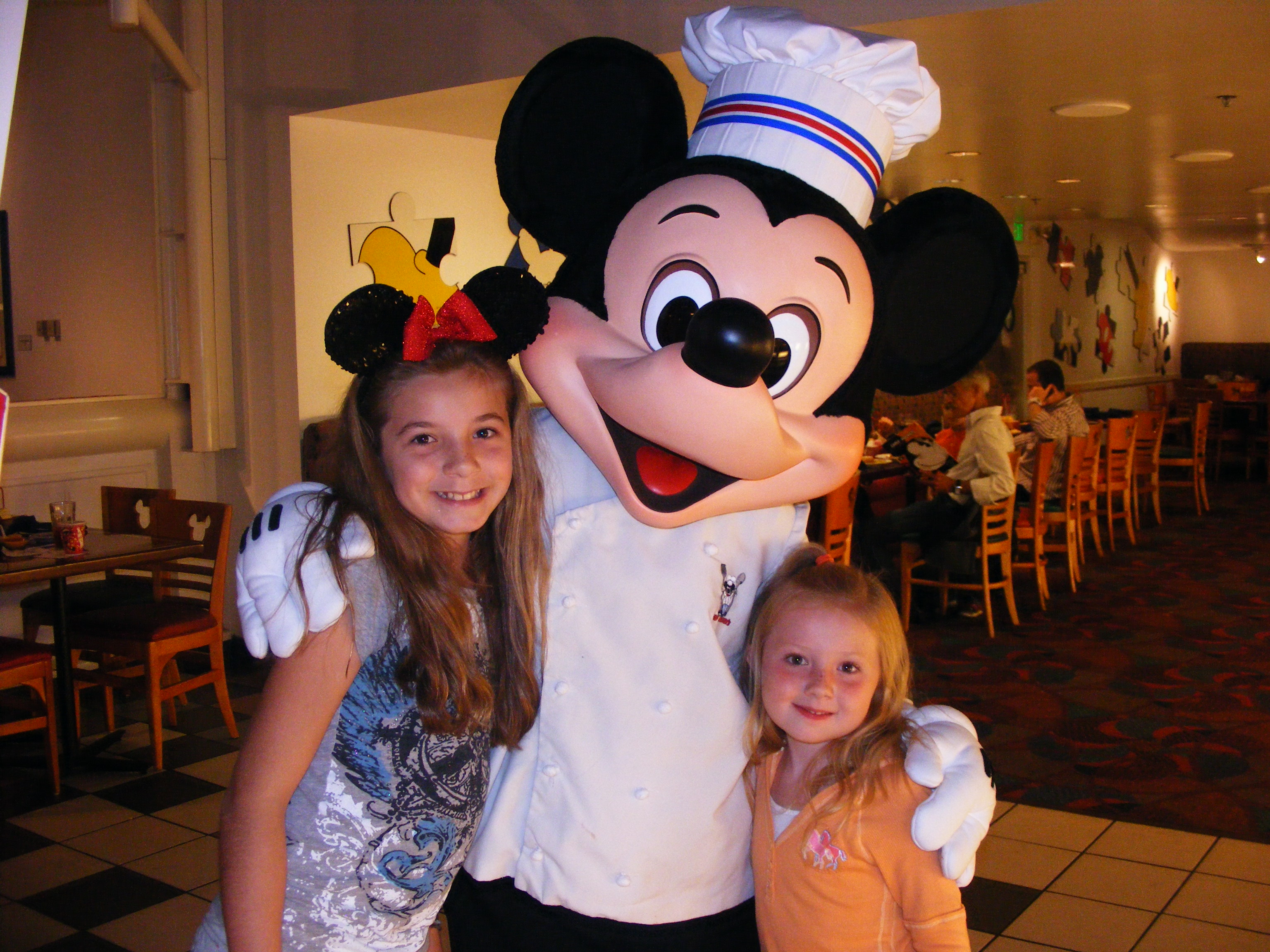 We finally got to meet Mickey when we ate at Chef Mickeys! We were all so excited. We loved Goofy too! This trip was a dream come true for all of us. We had the best time of our lives.

This week’s memory was submitted by Bernadette. 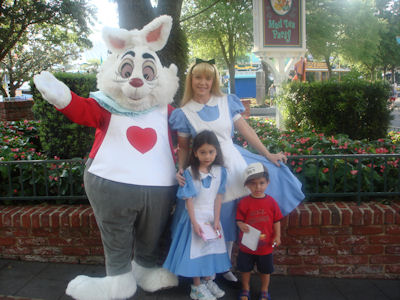 My daughter, Maddie, was so excited to show Alice her Alice dress! (April 2009)

This week’s memory was submitted by Louis K. We look forward to sharing your memories in upcoming issues! 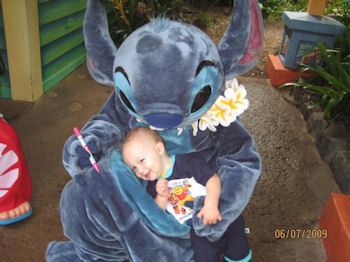 Brendan is enjoying an out of this world experience with his new friend, Stitch.

This week’s memory was submitted by Mike S. 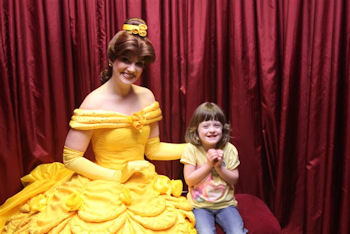 Here’s a picture of our magical memory. We went to Disney World about 2 weeks ago, and while there my daughter Anneliese celebrated her 4th birthday (and it was her first trip, as well). She’s very much into princesses (this day was one of only 2 that she didn’t wear a dress to the parks), and on her first full day there she got to meet Aurora, Snow White, Cinderella, and her favorite, Belle. I think this picture says it all!

In each issue, we feature a magical memory submitted by one of our readers. This week’s memory was submitted by Michelle W. We look forward to sharing your memories in upcoming issues! To submit your Magical Memory, e-mail a photo with a short description of your memory to info@magically-speaking.com. 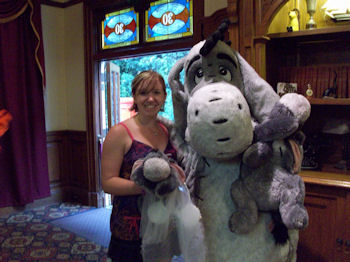 My adult daughter is in love with Eeyore. So imagine how excited she was when Eeyore grabbed a matching stuffed animal for their picture together! It made her entire trip, if not her entire year! Even adult children still feel the magic of Disney!

This week’s memory was submitted by Kelly G. 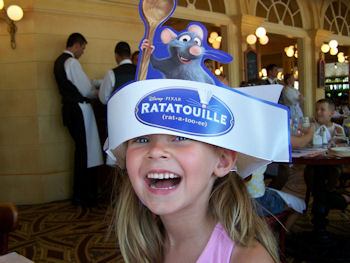 Even picky eaters can have fun eating at Disney. I liked having dinner with Remy!

This week’s memory was submitted by Bobbi M. 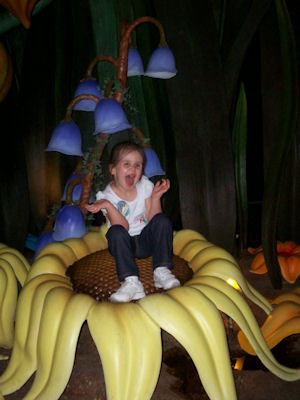 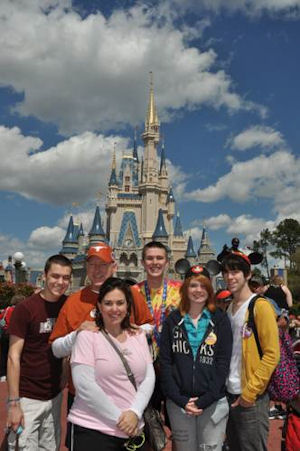 This week’s memory was submitted by Tammy Hill.

It was the last morning of our week long trip to WDW last March. We were at the Magic Kingdom, because it is our family tradition — we always begin our trip at the Magic Kingdom and end our trip at the Magic Kingdom. We arrived early, as we always do, and were waiting anxiously for Mickey and crew to arrive on the train to welcome us into the park. When the rope dropped we walked through the tunnel and out onto Main Street. It is always our routine to head straight to Space Mountain, but for some reason I looked to the left and saw the horse drawn street car sitting in the circle. I said to my son, “Let’s ride that.” Without hesitation we jumped on and the driver quickly started to head down Main Street. The ride alone was a thrill since we had never taken the time to ride in the street car, but then a man jump on and stood on the outside of the car and then another and then another — it was the DAPPER DANS!! It is my son’s dream to be a Dapper Dan and when they just appeared and began serenading us it was a truly magical moment!

This week’s memory was submitted by John B.

I hope this counts as a magical disney memory… it certainly was for me! My wife, my son, our neighbor and I were all set to enjoy lunch at the plaza in Magic Kingdom. While outside waiting to be seated I noticed the Mayor of Main Street filling out a magical moment certificate. I innocently inquired who it was for and was told it was for a special family inside. Smiling, I carried on not giving it another thought. Once inside however it was a totally different story. The mayor stood in the center of the plaza, asked for silence and proceeded to present the magical moment certificate to a family from Canada (My family was from Canada!), specifically from Nova Scotia (My family was from Nova Scotia!), The BROOKS family to be precise (My family was the Brooks family!). He had drawn up this moment right under my nose and still caught me by surprise. Anyone in my family will tell you that’s not an easy thing to do on a normal day. But, as I learned the fun way, no day is ever normal at Disney World.