The time had come!  I’ve watched the events of marathon weekend unfold the previous two years and always have loved the energy of it.  So on a spring afternoon in April 2015 at exactly noon, I registered myself and my husband for the 2016 Walt Disney World marathon.  After the difficulty registering for Wine and Dine in March of last year, I wanted to ensure we would get registered.  It is quite a science these days signing up for these popular races, but we got it.  After registering, I immediately downloaded the free training plan from Jeff Galloway and plotted out some local routes to accomplish this. 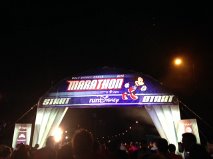 Other than that, my eyes were set on the January race weekend.

The whole event weekend is 5 days, starting on a Wednesday with the expo.  Here, they have every sort of running gear you might need and even some that you would have never thought about!  It’s exciting being there because it’s like your victory lap.  You’ve done all the hard work back home preparing and training and now you get to have fun!  There are 4 events- one each subsequent morning.  Some of my friends were crazy enough to do all four- they call that the Dopey-48.6 miles!  There’s a 5K, 10K, Half Marathon and Full Marathon.

We were only doing the full (crazy to say ONLY, that sucker is 26.2 miles), so we got in on Saturday morning.   After checking in, we took an expo bus from our resort, Caribbean Beach to the expo to pick up our bibs and shirts.  I would highly recommend requesting the Martinique or Barbados buildings if you stay here, as they are the first stops in the resort for the buses.  So your chances of getting on are pretty good.  In the morning, sometimes there are lines to get in the bus to the race.  We had a dinner at Trattoria al Forno on the Boardwalk, which was delicious.  We used Uber to get there and back, which was much faster than our Disney transportation options.  Time is very valuable on race weekends. Each morning, you are getting up at 3:00 a.m. to get to the start line.  An early bedtime is key and not wasting time on Disney transportation is also imperative.

The event itself was amazing!  We’ve done several RunDisney events, and this was just as great as we expected.  In fact, I’d say it’s one of my favorite.  Running through all 4 parks in the early hours of the morning was magical!  There were plenty of unique photo opportunities. 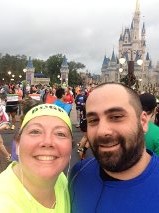 Running the the Magic Kingdom! 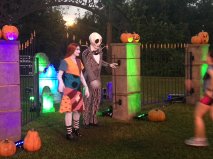 Jack and Sally photo op on the course!

For those that don’t know, the balloon ladies are two runners who are the last ones to cross the start line and they maintain the 16 minute per mile pace that RunDisney requires.  Some fear them, but they are really super awesome and sweet and do their best to keep you going!  They motivate you and as long as you keep up with them, you will not be swept.

Sure enough around mile 20 coming out of Wide World of Sports, I could see them coming up behind us.  My husband, more like a coach in this circumstance, pushed me to keep going.  I was fine if I got swept, but I knew he could do it, so I kept telling him to go ahead, but he wouldn’t.  So, we pushed and pushed pass several sweep points, at least 3 from mile 20 to mile 24.  I was so grateful for those balloon ladies and my husband that I didn’t give up.  At mile 24, right outside of the Studios, we pretty much were off roads and only had the walk from the Studios to Epcot and we were done.

Going by the Beach Club, I was so grateful to see our cheering squad still there!  Let me tell you, standing around cheering for that long is just as hard as being in the race itself!  It was so nice to see them and I powered on to the finish line.  My time was nothing to be proud of, but I finished, got the same medal and did the same mileage as every other runner that day.  It will always have a special place in my heart!

We had a nice celebratory dinner at Flying Fish at the Chef’s table with wine pairing that night.  And the next day we were flying out in the evening, but we went to the Magic Kingdom to get pictures with our medals and the castle and of course, Mickey!

Obligatory medal picture in front of the castle! 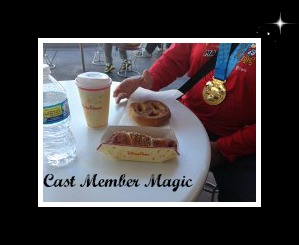 Snacks given to us the next day by a cast member who noticed our Marathon medals!

So, as soon as I was done and probably the entire last 2 miles of the race, I said never again!  But that is the crazy thing about running.  A week or two passes and we come running (see what I did there) back for more.  I definitely want to do it again, maybe even Dopey if I can commit to the training.  But there are so many awesome options with the RunDisney races!  I would encourage anyone to use these races as a goal and reward to getting active.  Start with a 5K and see where that takes you!

Have you ever run the Walt Disney World Marathon? What tips do you have for those who are considering signing up for 2017?