Have you heard about Elf on a Shelf….the popular hide and seek experience for the countdown to Christmas. At our house, I did a variation on Elf on a Shelf, I used toys around the house to surprise my 6 year old and 3 year old, in anticipation for our trip to Disney.

It began with this grand arrival. My daughter had a toy with the carriage so I thought this was a good way to have the cast of characters arrive. 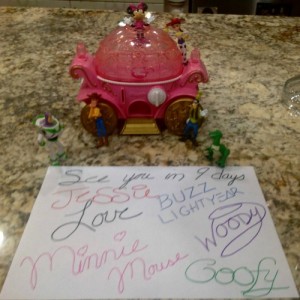 The next morning, Woody, Jessie, Buzz, and Rex were in an intense game of dominos. If you notice, they are playing their own pieces. 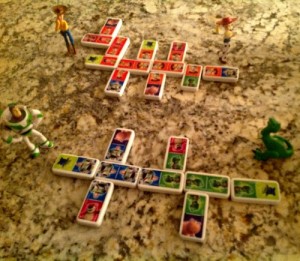 Since we went to Disney in the middle of October last year, fall had fully invaded our house. Goofy decided to get in on the decorating and design one of our pie pumpkins. 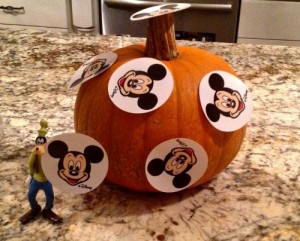 Look who wants to watch Toy Story? This led to us watching Toy Story once the kids got home from school. 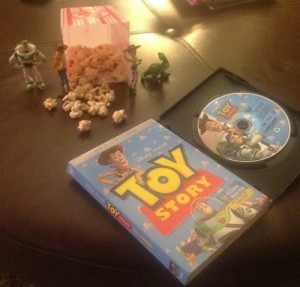 Mickey and Goofy found their Pirates of the Caribbean cups and helped themselves. 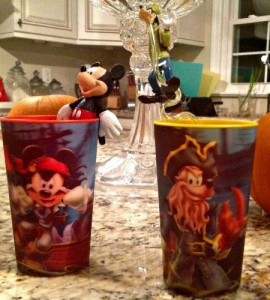 Minnie, Mickey and Goofy found their pictures but Jessie, Woody, Rex, and Buzz are unable to find theirs. The kids played with this one for 30 minutes. They found other Disney pictures and talked about old pictures and experiences they had. This was one of my favorites because I love remembering the great times we have had at Disney. 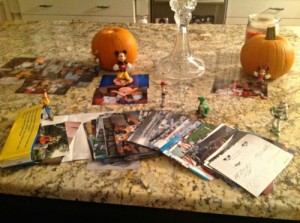 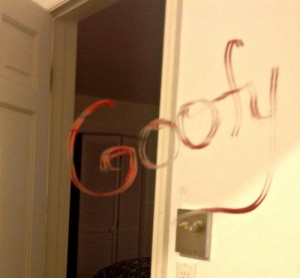 About 20 days prior to our leaving, I made a chalkboard countdown in the shape of a Mickey head. It was fun to wake up and write down how many days until we left. On the day before we left, Buzz beat us to the countdown.

Confession time, it was just as much for the kids as for me. I loved the creativity of imagining a new idea every night and their faces every morning.  Confession number two, if you notice, there are only 8 days accounted for but I stated 9 more days until we leave. I have neither documentation of this day nor a recollection of what I did, sorry. It must have been one of those nights I stayed up late packing.

Have you done a creative countdown?