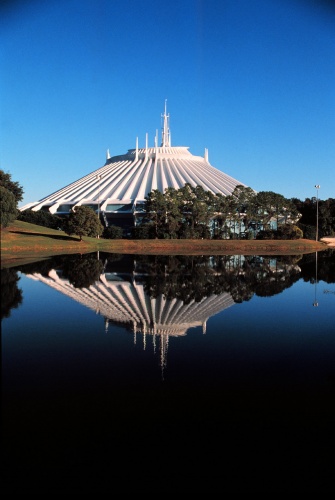 Tomorrowland at the Magic Kingdom was as much in an unplanned state during its early years as Disneyland’s was. The general layout was two signature buildings on either side of an entrance plaza. A racing track attraction, an indoor roller coaster and, for a while, quite a few bodies of water. Early plans route the monorail from the Persian resort through Tomorrowland with a station found inside the land.

By 1970 with construction underway, plans still changed regularly. By October 1971, the buildings were finalized however there was still a lot of empty space and unfinished plans for what would eventually fill the space. The main route into Tomorrowland would be flanked by two water features on the hub walkway, though these plans would go through several revisions before concrete was actually poured. The rush was on to finish what could be finished by opening day.

On October 1, 1971, Tomorrowland opens with two attractions. The southern end of the land is still a building site and even at that point, plans were still changing. The final entrance design had a pair of sloping concrete walls on either side of the plaza bridge; water would cascade down the slopes and fall from the top of a pair of 85 feet high ‘monoliths.’ At first the waterfalls on the slopes weren’t visible enough; the row of jets wasn’t that strong. Soon after opening ‘ripples’ were built onto the slopes to break the falling water more.

With just four main buildings, the barren Tomorrowland had views across to the Contemporary resort. The Skyway opened on October 1 1971 and the station had a cascading waterfall along its side and ramps and stairs to the upper level. Upstairs was load and unload, extra queue space and the maintenance bay for the cars. Unique for a cable car system, the attraction had an almost 90 degree turn in a midway station. Though there was no station as such, coming down and raising back up added an extra thrill.

The Skyway crossed the other Tomorrowland opening day attraction – the Grand Prix Raceway. It added some interest to what was then a very barren and open piece of land.  Originally, however, the raceway would have been in Holidayland, which was to be found  north of Tomorrowland. Unlike Disneyland’s Autopia the raceway was styled after a Grand Prix circuit of the late 60s and like many other attractions had a VIP lounge, this one as part of a concrete grandstand.

On November 25, 1971 the park saw it’s first opening since day 1; the CircleVision 360 Theatre. The first show in the 9 screen auditorium was “America the Beautiful.” The south building originally had a balcony for a future attraction wrapped around its perimeter. Part of the facade facing the plaza had a ‘chunk’ cut out; this was a large undercover space. The theater’s entrance hall was behind a wall of glass with automatic doors in the cutaway side. Inside was a large waiting area with a sloping ceiling. The ceiling and walls were in various shades of brown, red and orange. Beyond the waiting area was the main queue holding area. Guests walked en mass down a sloping ramp wrapping around the side of the theatre. Guests would then exit on the opposite side, walking up a ramp to exit onto the plaza.

Want to learn more about Tomorrowland…guess you’ll just have to wait until a later edition. ; )