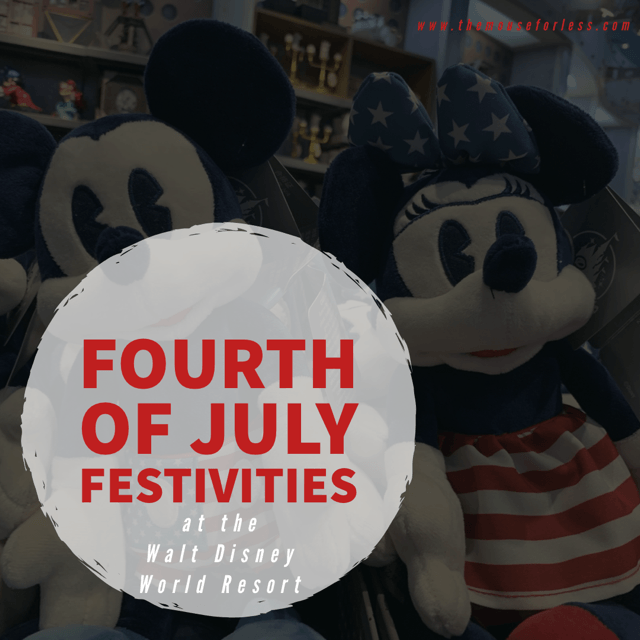 Fourth of July is just one week away! For those who are visiting the Walt Disney World Resort during this time of the year, there’s one thing for sure. Disney really likes to show off with spectacular fireworks shows! In addition to fireworks, there will also be live entertainment to enjoy, treats to sample, and more all in an effort to celebrate America’s independence.

Here’s a look at what you’ll be able to experience to celebrate the red, white, and blue this year.

For more fun, make sure you catch a performance of The Muppets Present…Great Moments in History. During the show, Miss Piggy, Kermit, Fozzie Bear and friends reenact famous moments in American history, in their own Muppet way. This is a live show that is performed daily in Liberty Square near the Hall of Presidents. (Another option to experience.)

Don’t miss the DJs spinning tunes at in Frontierland with the Hoedown Throwdown and with a Galactic Gathering in Tomorrowland.

If you want to experience one of the most patriotic things, you must catch the Flag Retreat. This event will leave a tear in your eye and it takes place at 5:00 p.m. daily in Town Square on Main Street U.S.A.

With the final performance of Illuminations: Reflections of Earth on September 30, this will be the last year for “The Heartbeat of Freedom” special finale tag that celebrates America. The tag adds a patriotic twist to the classic show. Illuminations will be performed at 9:00 p.m.

Throughout the day, don’t miss performances by the Voices of Liberty. This is an a cappella group who perform traditional Americana tunes. They will perform inside the American Adventure rotunda at 2:00 p.m. and 3:00 p.m and then offer a special 4th of July Concert at the America Gardens Theatre at 5:30 p.m., 6:45 p.m., and 8:00 p.m.

Guests who love to meet characters can meet Disney favorites who are dressed up to celebrate America’s birthday at the American Adventure Pavilion.

One show you do not want to miss is the American Adventure. This showcase is a journey through important moments in America’s history narrated by Audio-Animatronic figures of Benjamin Franklin and Mark Twain and the finale brings a tear to the eye.

Finally, Guests will be able to enjoy themed eats and beverages specific for the day throughout the park. Items will include patriotic cupcakes, special dining packages, red, white, and blue sangria, and a Boom Berry Lemonade.

As far a special fireworks show, there isn’t one at Disney’s Hollywood Studios. Guests will be able to enjoy the Star Wars: A Galactic Spectacular fireworks show which takes place at 9:30 p.m. Guests can also enjoy Fantasmic! which will take place at 9:00 p.m.

The park’s nighttime show, Rivers of Light was recently updated to Rivers of Light – We Are One. This new version celebrates a connection with nature, as well as it now uses Disney character motifs and music to enhance the story.  Rivers of Light is shown twice at 9:00 p.m. and 10:00 p.m. There is not a special Fourth of July version of this show.