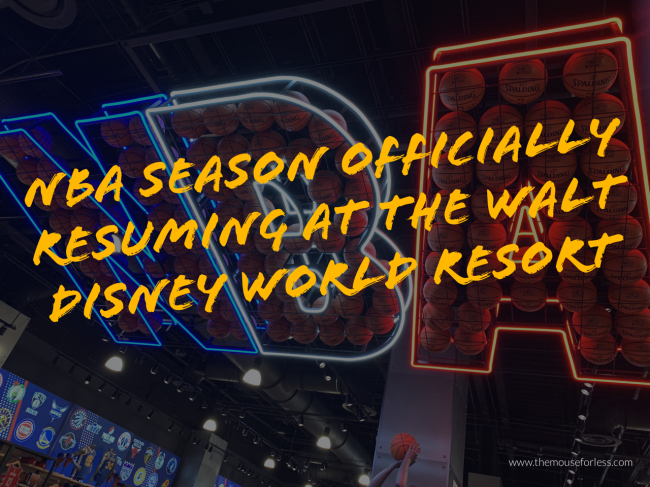 The National Basketball Association…you’ve been cleared to have your season resume, what are you going to do next? They’re going to Walt Disney World! That’s right, the NBA will be finishing its 2019-20 season at the Walt Disney World Resort. The season will resume in July with team practices and games played at ESPN Wide World of Sports Complex in the Arena, HP Field House and Visa Athletic Center.

Game play will resume on July 30 with 22 teams with the eight teams in each conference that have the highest current winning percentages and the six teams currently within six games of the eighth seed in either conference competing to determine seeding for the NBA Playoffs. The playoffs will feature 16 teams. The NBA Finals will end no later than October 13. Unfortunately for fans, all games will be held without spectators.

“We have worked together with the Players Association to establish a restart plan that prioritizes health and safety, preserves competitive fairness and provides a platform to address social justice issues,” said NBA Commissioner Adam Silver. “We are grateful to our longtime collaborator Disney for its role in playing host and making this return to play possible, and we also thank the public health officials and infectious disease specialists who helped guide the creation of comprehensive medical protocols and protections.”

“We’re glad to be able to provide a unique venue where the NBA can resume its season at ESPN Wide World of Sports Complex,” said Josh D’Amaro, Chairman, Disney Parks, Experiences and Products. “We look forward to welcoming the players, coaches and staff to Walt Disney World Resort as they prepare for the exciting return of professional basketball.”

It was announced earlier that the NBA players will be staying at one of three Walt Disney World Resort Hotels – Gran Destino Tower, Disney’s Grand Floridian Resort, and Disney’s Yacht Club Resort. More details can be found here.

Visit here for more information about the 2019-20 NBA season.