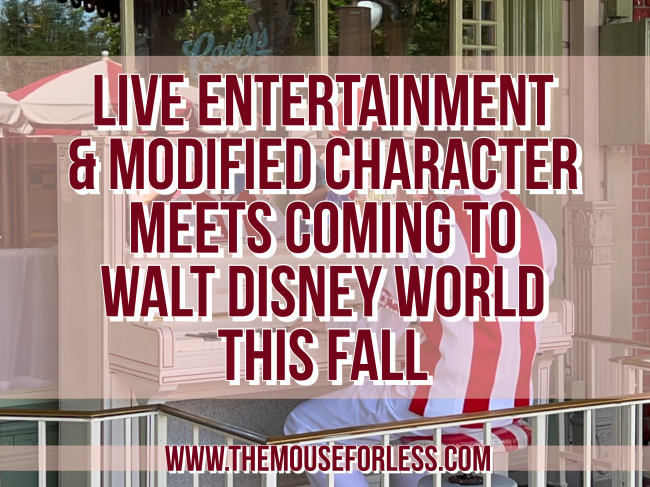 One of the best things about a Walt Disney World vacation are the entertainment offerings and this fall, a number of options will be returning! In fact, a few are actually already back! (I caught them this past weekend when I was visiting!)

On October 1, the Magic Kingdom’s welcome show, “Let the Magic Begin” returned to the Cinderella Castle Forecourt Stage. In addition, the ragtime piano player at Casey’s Corner on Main Street, U.S.A. has also returned. EPCOT has also brought back a number of World Showcase performers! Alberta Bound can be found in the Canada Pavilion, Sergio is in the Italy Pavilion, and the Taiko drummers of Matsuriza are playing once again in the Japan Pavilion.

Moving over to Disney’s Hollywood Studios, beginning on November 7, Guests will once again be able to see “Disney Movie Magic.”  The projection show celebrates Disney’s live-action film legacy. When it resumes, it will even feature a new sequence from the live action version of “Mulan.” For those who love stunt shows, the “Indiana Jones Epic Stunt Spectacular” will return on December 19.

At Disney’s Animal Kingdom, in the Asia section, Guests will once again be able to enjoy the music of Chakranadi. Also, Kora Tinga Tinga will be returning to the streets of Harambe in Africa. Finally, Guests will also be able to see the Tam Tam Drummers in Africa in early November.

Moving over to the resorts, performers will also soon be strolling along the waterfront at Disney’s Boardwalk Resort. Oh and yes, Yehaa Bob will be back in the River Roost Lounge at Disney’s Port Orleans Resort – Riverside beginning October 14.

But live entertainment isn’t the only thing returning! That’s because soon you’ll be able see favorite Disney characters once again. However, things will still be distanced, as Guests won’t be able to give a hug or get an autograph. Instead, you will once again be able to have individualized time with some of your favorite characters and get to take some photos.

At the Magic Kingdom, Guests will be able to see Disney Princesses in Princess Fairytale Hall in the Magic Kingdom. Also, Mickey Mouse will once again be backstage at Town Square Theater on Main Street, U.S.A. Here Guests will find him wearing his all-new EARidescent look designed just for the Walt Disney World 50th Anniversary Celebration! At Disney’s Hollywood Studios, you’ll soon find Minnie Mouse at Red Carpet Dreams. You’ll also find the stars of Disney Junior in Animation Courtyard. These characters will be welcoming guests in November.

Who else is excited to see so much entertainment return?