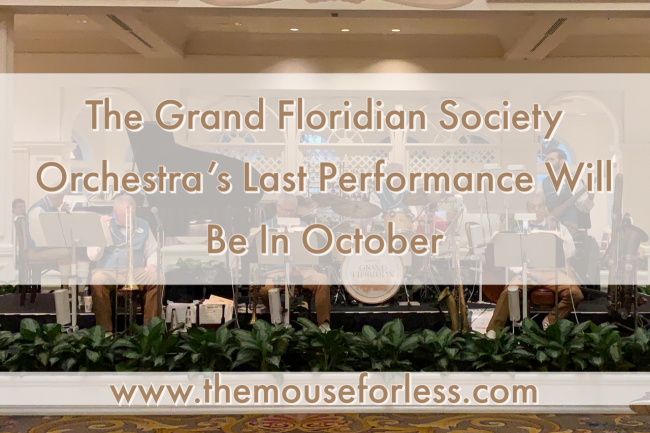 This weekend, via their Facebook page, The Grand Floridian Society Orchestra shared that their last day of performing would be on October 3 at the Walt Disney World Resort.

The band, which was traditionally a mainstay at Disney’s Grand Floridian Resort & Spa, has actually been playing at Disney’s Hollywood Studios as the Disney Society Orchestra since early August. Their current show features musical highlights from favorite movies like The Little Mermaid, Toy Story, the Muppets and more. 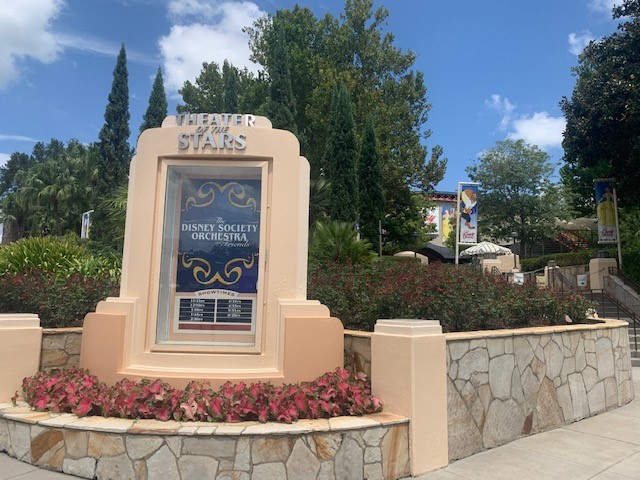 In their message to their fans, they shared the following: 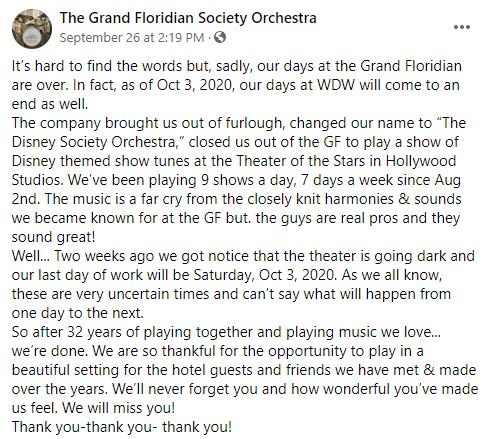 The company brought us out of furlough, changed our name to “The Disney Society Orchestra,” closed us out of the GF to play a show of Disney themed show tunes at the Theater of the Stars in Hollywood Studios. we’ve been playing 9 shows a day, 7 days a week since Aug 2nd. The music is a far cry from the closely knit harmonies & sounds we became known for at the GF but the guys are real pros and they sound great!

Well…Two weeks ago, we got notice that the theater is going dark and our last day of work will be Saturday, October 3, 2020. As we all know, these are very uncertain times and can’t say what will happen from one day to the next.

So after 32 years of playing together and playing music we love….we’re done. We are so thankful for the opportunity to play in a beautiful setting for the hotel guests and friends we have met & made over the years. We’ll never forget you and how wonderful you’ve made us feel. We will miss you!

Take a look at our tribute video of the band performing at Disney’s Grand Floridian Resort:

The bands’ last performances will take place at Disney’s Hollywood Studios in the Theater of the Stars, which is where Beauty and the Beast – Live on Stage is performed.

The band does share on their Facebook page that they do have CDs available for purchase, for those who would like them and that you should message them if you are interested in purchasing them.