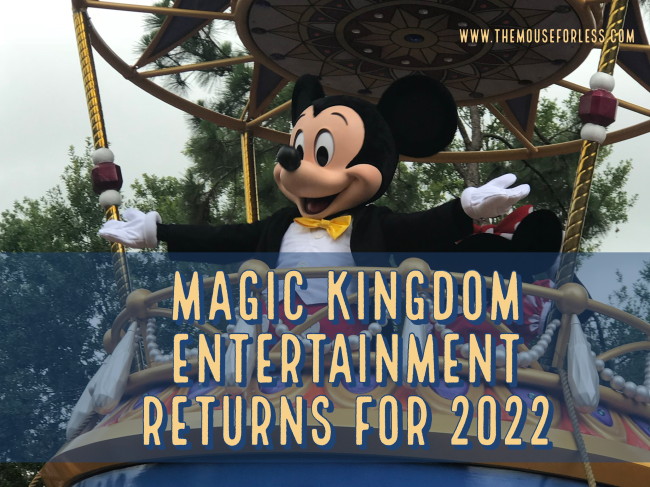 Yay!!! Entertainment is returning to the Magic Kingdom, including a few fan favorites that we’ve been anxiously awaiting! So if we’ve been waiting for it, you’ll be excited about it too!

On February 11, a brand new cavalcade will kick off! The Disney Adventure Friends Cavalcade will debut and it will include nearly 30 favorite Disney and Pixar friends. It will include Nick and Judy from “Zootopia,” Baloo and King Louie from “The Jungle Book,” José Carioca and Panchito from “The Three Caballeros,” plus Merida, Moana, The Incredibles, and the debut of Miguel from “Coco”.

Debuting on February 25 will be the Mickey’s Magical Friendship Faire. The show will take place on the Cinderella Castle Forecourt Stage. It has been newly enhanced for the Walt Disney World 50th Anniversary celebration. It will incorporate favorite scenes inspired by “Frozen,” “Tangled,” and “The Princess and the Frog”. In addition, it will feature a new opening and a new finale with Mickey Mouse and all his friends in their sparkling, EARidescent outfits. The show will be presented multiple times a day and an original song entitled “Where the Magic Feels Like Home.”

The returning favorite that I think most are excited for though will happen beginning March 9. The Disney Festival of Fantasy Parade will be back beginning March 9, which is the anniversary of the debut of the parade in 2014! The Disney “Festival of Fantasy” Parade is a true spectacle and features characters from “The Princess and the Frog,” “Tangled,” “Peter Pan” and more. Most impressive though, perhaps, is the fire-breathing Maleficent Dragon float!

These new and returning entertainment offerings are just the tip of the iceberg. Also slated to return in 2022 at the Walt Disney World Resort will be “Finding Nemo: The Big Blue… and Beyond!” and “Fantasmic!”.