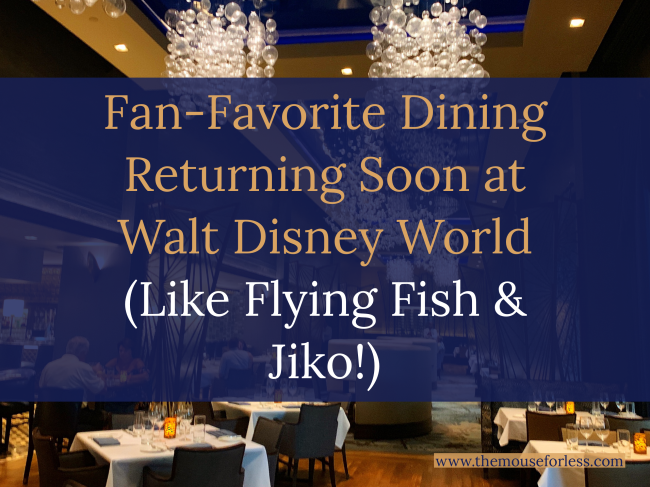 The Flying Fish at Disney’s BoardWalk will be reopening on January 27! This restaurant will continue to offer signature seafood dishes. Options will include the Seafood Pearl Pasta which consists of shrimp, lobster, scallops, clams, and mussels or the Plancha-seared Scallops accompanied with savory grits, sweet corn, and Peppadew emulsion. For dessert, enjoy the Cocoa Breach which is accompanied with  vanilla custard.

Beginning February 3, the Turf Club Bar and Grill at Disney’s Saratoga Springs Resort & Spa will be reopening. Dishes will include a New York Cider-braised Mussels appetizer flavored with garlic, chorizo, fennel, Fresno chili, and apple cider topped with a grilled baguette, a Grilled Pork Chop or Braised Lamb Tagliatelle, and for dessert, the New York Cheesecake.

The one everyone has been asking for is returning. (There’s even a social media account asking if Jiko has reopened.) Jiko, at Disney’s Animal Kingdom Lodge will be reopening on February 17. This spot offers flavors of African, Indian, and Mediterranean cuisine. Guests can once again enjoy the Seafood Tagine which is illed with prawns, scallops, squid, and Littleneck clams. For dessert, try the Kilimanjaro dessert, which is dark chocolate mousse, pistachio financier, pink peppercorn meringue, cacao nib crunch, and ras el hanout pineapples.

In addition, a few restaurants that have been open previously will see updates to their offerings. They include:

Over at Cape May Café on February 15, the restaurant will again serve an all-you-care-to-enjoy, buffet breakfast. Dishes will include tasty items like pull-apart bread with vanilla sauce, beef hash, and an omelet station. Plus, there will be Mickey and Minnie waffles! For dinner, the buffet will return, as well. It will offer cornbread, seasonal harvest salad, seafood boil, and a daily carving station. Unfortunately, the snow crab legs will not be on the buffet. They will now be an upgrade option, as well a whole lobster. Both can be purchased by the pound.

At Disney’s Yacht Club Resort, starting January 31, the Ale & Compass Restaurant will be brining returning breakfast options back. Plus there will be some exciting, new lunch offerings too. Coming back for breakfast will be à la carte entrées, like Blueberry Bacon Pancakes. Best of all, also returning will the be tasty buffet. The buffet will include pastries, fresh fruit, yogurt parfaits, overnight oats, and house-made cheddar biscuits with country gravy.

Reservations for the returning Walt Disney World Resort restaurants will open on January 20.