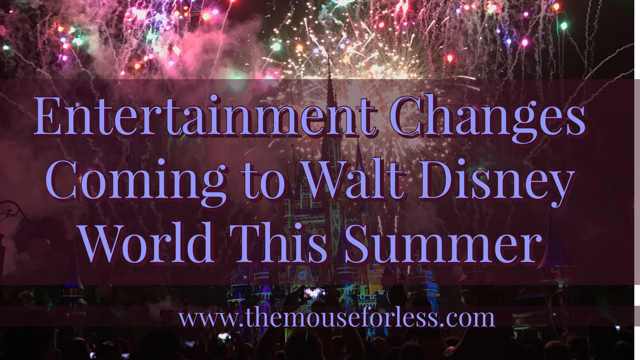 If you are a fan of Walt Disney World entertainment, then I have very important news! That’s because four more fan-favorite entertainment offerings are returning soon! However, we also have news that a couple of offerings are leaving forever. Wait….what?

Let’s start with the good news first. Starting August 1, at Disney’s Hollywood Studios, Guests will be able to experience the return of the nighttime show, “Wonderful World of Animation.” This cinematic experience transforms the Chinese Theater using projections and it tells the story of more than 90 years of Disney animation.

Take a look at the show here via our YouTube channel:

Also returning later in the month of August will be “Beauty and the Beast – Live on Stage.” The live action show will debut on August 15 at the Theater of the Stars on Sunset Boulevard at Disney’s Hollywood Studios.

If you are a fan of Monsters, Inc. Laugh Floor at the Magic Kingdom, you’ll be able to head back to Monstropolis beginning on August 8.

Finally, beginning August 21, you can get your most pressing turtle questions answered during Turtle Talk with Crush at The Seas with Friends at EPCOT.

I mentioned the bad news though. And trust me when I say that this one hurts. The official end of “Happily Ever After” at the Magic Kingdom has been announced. The last showing of that fireworks spectacular is on September 29. In addition, “EPCOT Forever” will conclude its limited-time run on September 28. Two new nighttime shows will debut on October 1 – “Disney Enchantment” and “Harmonious”.

We’ll be sure to continue to bring you the latest entertainment related news as we learn it.