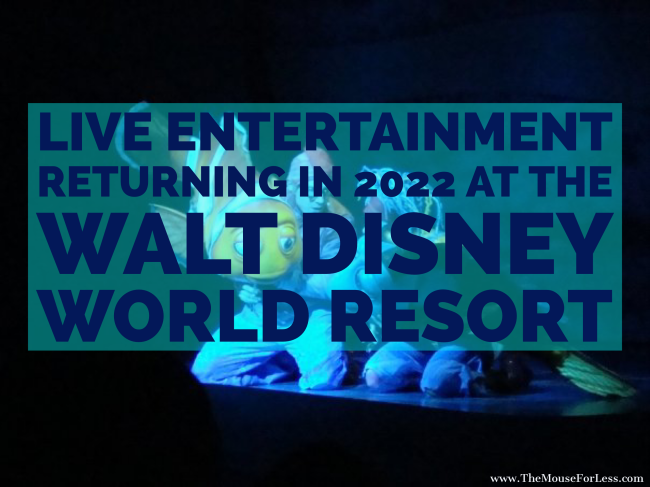 If you have a trip planned for 2022 at the Walt Disney World Resort, some great new entertainment offerings are going to be returning! These will include many fan favorites, as well as a few new offerings!

First things first, as was previously announced, Disney’s Animal Kingdom will be debuting a reimagined version of “Finding Nemo: The Musical” to Theater in the Wild. This newly updated show will be called “Finding Nemo: The Big Blue… and Beyond!” This new show is set in the timeline of the movie “Finding Dory.” Guests will find themselves at the Marine Life Institute where the gang from “Finding Nemo” have made their way across the ocean to California. They tell the story of Nemo and how they all got there, incorporating many of the beloved songs and production numbers from the original show. “Finding Nemo: The Big Blue… and Beyond!” will debut in 2022.

Moving over to the Magic Kingdom, live entertainment will be returning in a big way early next year. First, taking place on the Cinderella Castle Forecourt Stage will be “Mickey’s Magical Friendship Faire.” This show will incorporate favorite scenes from the previous version of the show, with sequences inspired by “Frozen,” “Tangled,” and “The Princess and the Frog.” There will also be a new opening and a new finale with Mickey Mouse and all his friends. The show will also include an all-new, original song entitled “Where the Magic Feels Like Home.”

For those, like me, who love cavalcades, the good news is that they are going to be sticking around. At the Magic Kingdom, there will be a brand new cavalcade that will debut called the Disney Adventure Friends Cavalcade. The Disney Adventure Friends Cavalcade will feature the most characters of any cavalcade to date. It will include Nick and Judy from “Zootopia,” Baloo and King Louie from “The Jungle Book,” José Carioca and Panchito from “The Three Caballeros,” Miguel from “Coco,” plus Merida, Moana, The Incredibles, and so many more!

But for those who love full blown parade, early 2022 will be a great time for you. That’s because the Disney “Festival of Fantasy” Parade will be returning.

More details about all of these new additions and returning favorites will be shared here soon!

0 replies on “Entertainment Announced for Walt Disney World for 2022”