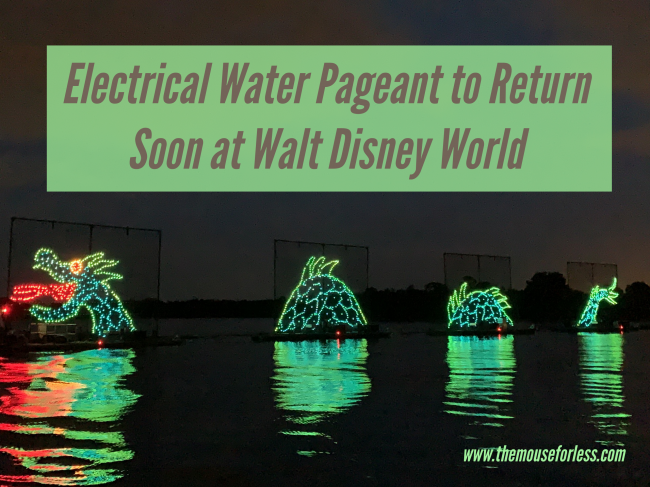 It is a fan favorite, and it is certainly one of the things I love to catch when visiting the Walt Disney World Resort. It’s music is simply ridiculously catchy, so I’m happy to hear that the Electrical Water Pageant has now returned!

Disney previously shared on their social media that the nighttime show will be sailing on the waterways of the Seven Seas Lagoon and Bay Lake once again.

Guests at Disney Resort hotels along Seven Seas Lagoon and Bay Lake will once again have a chance to see The Electrical Water Pageant as it will soon make its return to the waterways of @WaltDisneyWorld Resort. pic.twitter.com/ImuN6G3CcL

About the Electrical Water Pagaent

For those that have never seen the Electrical Water Pageant, it is a stunning nighttime electric light show that takes place on these small barges. And you heard me mention that soundtrack, that’s because it’s incredibly fantastic and super 80s. (This very electronic). The Pageant features huge screens that can be found between fourteen barges. These barges then use Christmas lights to create the awesome display.

There are two parts to the show. The first showcases various sea creatures, while the second half is a patriotic salute. The total show runtime is about is about ten minutes.

This popular show has been enchanting Guests since 1971. It sets sail each evening and makes stops at various resort hotels along the way. Guests can catch the show at Disney’s Grand Floridian Resort, Disney’s Polynesian Village Resort, Disney’s Contemporary Resort, Disney’s Fort Wilderness Resort, and Disney’s Wilderness Lodge. You can also catch it just outside the Magic Kingdom.

If you’ve never caught the show before, we have a great and unique view of it on our YouTube channel. Take a look: