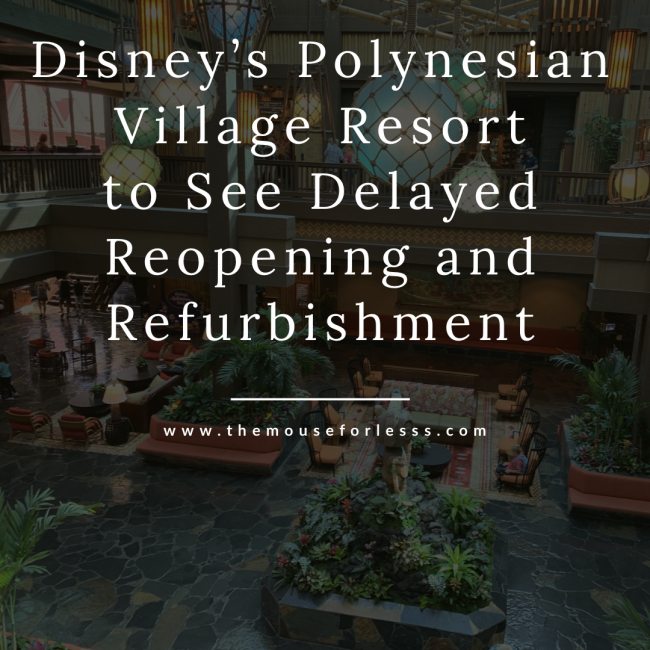 Since reopening, the Walt Disney World Resort has seen phased reopening of its resort hotels. They have adjusted their reopening schedule multiple times and they are once again making changes, this time in relation to Disney’s Polynesian Village Resort’s reopening.

Disney’s Polynesian Village Resort was originally supposed to reopen on August 12. The reopening was then pushed back to October 4. Now it will be pushed back again, but this time, for an extended period of time, as Disney has announced that the resort will now not reopen to hotel Guests until next summer.

During this delay in reopening, it is allowing the Walt Disney World Resort to complete some refurbishment work on the hotel. Work will be done to not only the Guest rooms and according to the Orlando Sentinel, changes to the rooms will include a move to a new color palette as well as details, patterns and textures from the film Moana. In addition, work will also be done to the Great Ceremonial House.

In addition, due to the upcoming refurbishment work at the Great Ceremonial House, monorail service to Disney’s Polynesian Village Resort will be temporarily suspended beginning in early October 2020. Guests who are staying at the Polynesian will be able to use the walkway to the Transportation and Ticket Center to access the monorail and ferry boats to the Magic Kingdom.

The work on the resort will begin in early October. Do keep in mind that the Villas and Bungalows at Disney’s Polynesian Village Resort will remain open during this refurbishment. Those impacted by this upcoming closure will be emailed about their upcoming reservation.