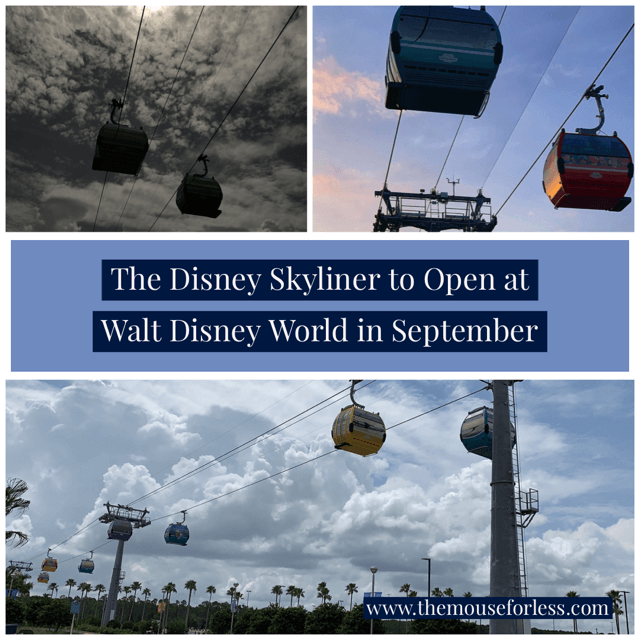 Over the Fourth of July holiday, I specifically booked my Walt Disney World Resort stay on the off-chance that I would be able to maybe get a ride on the Disney Skyliner, the new gondola system for the resort. Unfortunately, my wishes weren’t granted, but seeing those cars zip through the sky definitely increased my desire to get on this new mode of transportation for the resort.

Today, the Walt Disney World Resort announced that the official opening date for the Disney Skyliner will be in September! September 29, to be exact! The Disney Skyliner will not only offer amazing views that are only available to Guests from the sky, but it will also be a brand new way to travel the resort. (Sure, there was the Skyway back in the day at the Magic Kingdom, but that was more of an attraction than a means of transportation and it certainly wouldn’t take you all around the resort!)

The Disney Skyliner will transport Guests to two theme parks and four resorts. It will connect both Epcot and Disney’s Hollywood Studios to four of the Walt Disney World Resort hotels – Disney’s Art of Animation Resort, Disney’s Pop Century Resort, Disney’s Caribbean Beach Resort and the upcoming Disney’s Riviera Resort (Which will open in December 2019.)

The Disney Skyliner includes cabins that feature artwork of your favorite Disney films, attractions and characters. Cabins include Coco, The Haunted Mansion, Goofy, Finding Nemo, Mike and Sulley, The Seven Dwarfs, Beauty & the Beast characters, Star Wars, and more. Now, not every cabin is decorated, but a fair number of them actually are.

Take a look at the Disney Skyliner go as it travels to and from Disney’s Hollywood Studios.