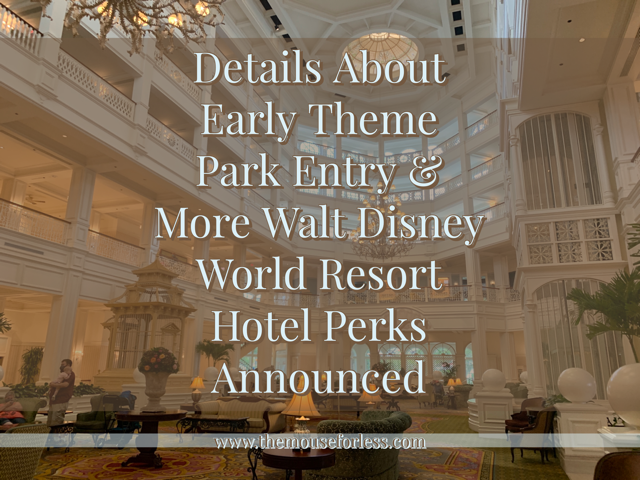 To kick of the Walt Disney World’s 50th anniversary, there will be a number of new things offered. These include things like fireworks shows, daytime shows, attractions, cavalcades, and more. But there’s one more thing that’s officially been announced that will be kicking off on October 1. That is the new Early Theme Park Entry benefit. This option will be available for those Guests staying at a Walt Disney World Resort Hotel and allows them to enter any of the four theme parks a half hour early, every single day!

Early Theme Park Entry replaces Extra Magic Hours, which granted Guests staying at a Walt Disney World Resort early entry for up to an hour prior to park opening or let Guests stay up to two hours after official park closing.

Guests wishing to use Early Theme Park Entry will need to make sure that they have a valid ticket. They will also need a theme park reservation for the same park on the same date for early theme park entry.

But Early Theme Park Entry isn’t the only perk that will be offered for Disney Resort Hotel Guests. For those staying at a Disney Deluxe or Deluxe Villa Resort Hotels, there’s another perk. Those individuals will also be able to enjoy extended evening hours on select nights in select theme parks. These extended evening hours will also begin in early October. Specific dates and parks will be shared at a later time. We’ll provide the details about the schedule when it’s released.

Please note that Guests will need a valid ticket and a theme park reservation for the same park on the same day to experience extended evening hours. Or, guests may visit with a ticket with the Park Hopper option or an Annual Pass as long as they entered their first park where they made their reservation earlier in the day.

There will be more perks for those visiting Walt Disney World Resort Hotels. That’s because Guests will find special Disney characters stopping by. Oh and they will be dressed for the 50th, in their EARidescent best.

And of course, one of the most asked questions I get is when is the Disney Dining Plan returning? Well while Disney didn’t share specific dates, they did share that the Dining Plans will be returning at a later date. We’ll share those details with you when we learn them!

The 50th anniversary is getting better and better as we inch closer to the kickoff! We’re certainly getting excited.