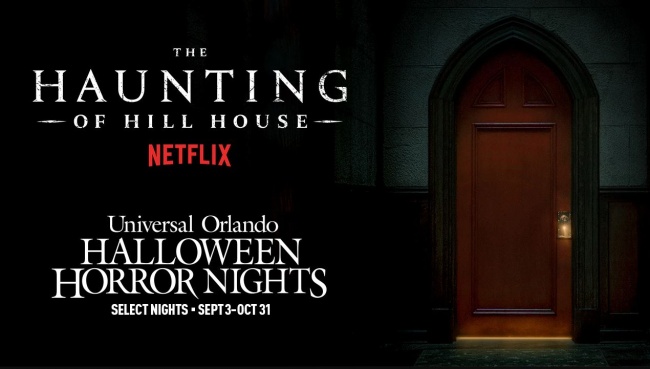 Another Halloween Horror Nights house has been released and it’s based on the Netflix’s critically-acclaimed series “The Haunting of Hill House.”

Upon its release, Netflix’s “The Haunting of Hill House” became a worldwide phenomenon. The show is a chilling horror story that follows members of the Crain family. The family is haunted by long-dormant fears stemming from their time living in the menacing Hill House as children. They are then forced to face the ghosts of its grisly past.

During Halloween Horror Nights, the imposing and mysterious Hill House eerily comes to life. It will beckon Guests to embark on the dark journey experienced by the Crain family. Iconic scenes from the Netflix series will be featured throughout the maze, including the omni-powerful Red Room – the heart of Hill House – and the infamous Hall of Statues, where deceptive powers overtake everyone who enters. Apparitions will appear around every corner, from William Hill – The Tall Man, whose towering stature overwhelms everyone he encounters; to The Ghost in the Basement, who feverishly crawls throughout the bowels of the House in search of his next victim; to The Bent-Neck Lady, whose disturbing scream and ghastly appearance invoke a constant state of unnerving dread.

Take a look at the trailer for the house here:

This year, there will be 10 terrifying haunted houses, 5 scare zones, and so much more. Tickets for Universal Orlando Resort’s Halloween Horror Nights 30 are on sale now.