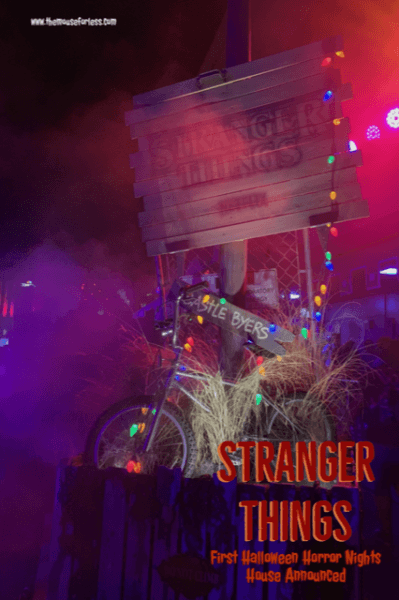 I am a complete scaredy cat. Like huge. But despite all that, one of my favorite things to do each and every year is Halloween Horror Nights at Universal Studios Florida. The event really is a ton of fun, and even though I don’t do the houses, I still have a blast with the scare zones, food, and more.

However, there is one house that I have done. It is the only haunted house I’ve ever gone into in my entire life and it was last year’s Stranger Things maze. And it looks like this year, I may be sucked into doing another one….because it has officially been announced that Stranger Things is back as a house, and this time, it’s going to be better than ever.

You see, they aren’t just featuring the second season in this year’s experience. Nope….they are going to be featuring scenes from the upcoming third season that is slated to begin airing on July 4 this year.

During the trip to Hawkins, Indiana this time, Guests will come face-to-face with snarling Demodogs, as well as make their way through iconic scenes and locations, from Chief Hopper’s cabin to the Starcourt Mall.

Oh and for those who are looking to visit Halloween Horror Nights because Stranger Things will be featured, this house will likely be one of the most popular ones, so expect long lines. Lines were frequently hours long for the Stranger Things house last year.

This announcement is just the start for the anticipated #HHN29. There are slated to be ten haunted houses again, five scare zones, and great live entertainment. Oh and this year Halloween Horror Nights runs select nights from Friday, September 6 through November 2.

Have you attended Halloween Horror Nights before? What tips do you have for those who are new? Let us know in the comments below or on Facebook or Twitter!

Want to visit Halloween Horror Nights? Contact The Magic for Less Travel for more information and a free, no-obligation quote.

Avengers Campus to Open at Disney California Adventure in Summer 2020

New “It” Disney Color – Belle of the Ball Bronze Released

Confisco Grill at Islands of Adventure Gets an Updated Menu