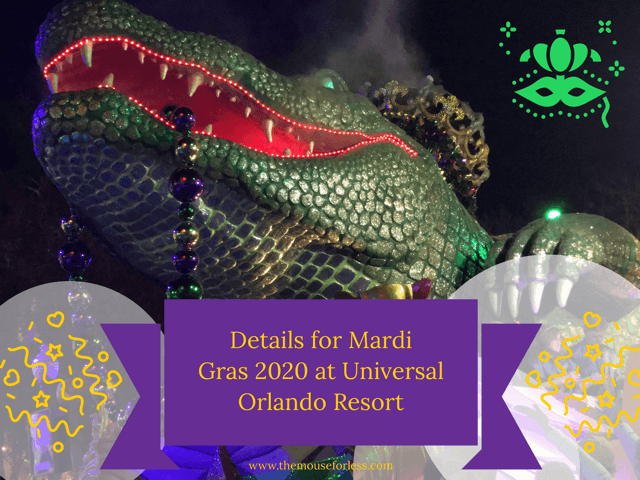 This year, Universal Orlando Resort invites Guests to join them for the 25th annual celebration of Mardi Gras! This version is a huge family friendly party that brings a nightly parade, authentic Cajun-style cuisine and – on select nights – live concerts by a fantastic lineup of musical artists. This year, Mardi Gras will run daily from February 1 through April 2.

One of the most fun aspects of the event is the Mardi Gras parade, which features a theme that is inspired by the Treasures of the Deep. The parade occurs on the streets of Universal Studios Florida nightly and features intricately detailed floats, vivacious dancers and stilt performers with extraordinary costumes, and countless beads. Trust me when I say that this parade will have you chanting “feet don’t fail me now! This year, the parade will debut six new floats inspired by mystical creatures of the deep, the sunken city of Atlantis and more.

The floats that are used for this parade are all hand-crafted by Kern Studios, which is the very same company that has created floats for the iconic New Orleans celebration since 1947. And, fan-favorite floats, including the Riverboat and King Gator, will return with all-new décor celebrating 25 years of party. Want to see what this parade is like? Take a look at our overview of last year’s parade.

Looking to catch some of your favorite musical acts? For 16 select nights during the event, guests can enjoy performances by some of the biggest names in music, including world-renowned, chart-topping DJ and producer, Marshmello, the multi-platinum international star behind global smash-hits “Despacito” and “Échame La Culpa,” Luis Fonsi, and best-selling American girl group of all time, TLC, known for mega hits such as “Waterfalls,” “No Scrubs,” “Creep” and “Unpretty.” Performances take place in Music Plaza, which can be found in front of Hollywood Rip Ride Rockit!

The full lineup for Mardi Gras concerts are:

There is also authentic and wonderful New Orleans bands that perform. They can be found in the French Quarter Courtyard and include:

One of the best parts about Mardi Gras celebrations at Universal Studios Florida are the tasty authentic Cajun dishes that are available at The French Quarter Courtyard. New to this year’s event, Guests will be able to enjoy all-new food and beverage offerings at the Carnival Around the Universe tasting tent that will feature dishes inspired by carnivals worldwide with new menu items debuting bi-weekly throughout the event. And returning to this year’s event are fan-favorite add-on experiences, including the Bayou Boil, bringing guests an authentic New Orleans crawfish boil experience, as well as the Mardi Gras Tasting Lanyard which gives guests the chance to try a variety of classic New Orleans dishes throughout their visit – including gumbo, jambalaya, po boys and more.

The best part about Mardi Gras at Universal Orlando Resort is that the celebration is included with admission to Universal Studios Florida!