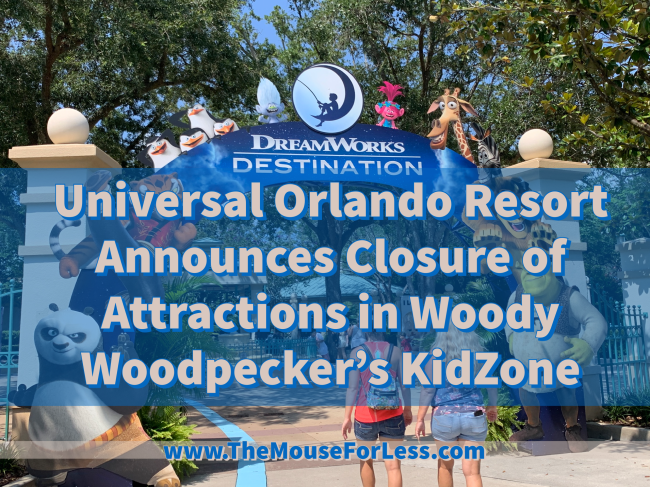 It’s the end of an era! Universal Orlando Resort has officially shared, via their social media that a number of attractions in Woody Woodpecker’s KidZone will officially be closing in the beginning of the new year.

According to the post, Fievel’s Playland, Woody Woodpecker’s Nuthouse Coaster, Curious George Goes to Town, Dreamworks Destination, and Shrek and Donkey’s Meet & Greet will all be closing on January 16, 2023, with the last day of operation being on January 15.

Don’t worry….a few fan favorites will still remain in Woody Woodpecker’s KidZone. They will include The E.T. Adventure, Animal Actors on Location!, SpongeBob StorePants, the meet and greet with SpongeBob and his friends, and KidZone Pizza Company.

Universal didn’t share many details about what will be replacing the closed attractions at Universal Studios Florida, but they did share that it will include new family entertainment that focuses on beloved animated characters.

Follow The Mouse For Less for more information about the latest Universal Orlando Resort news.