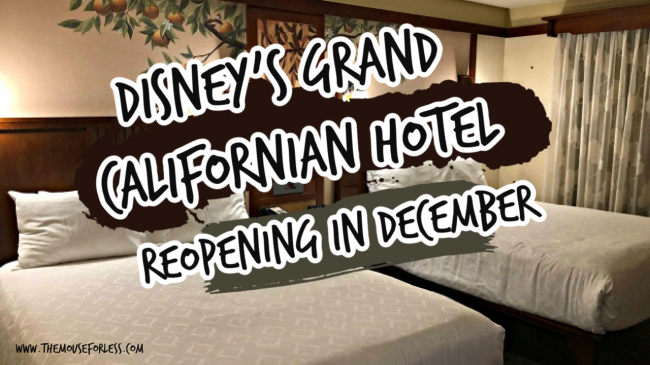 The reopening of this resort will be done in a gradual, phased way that keeps in mind the guidance of government and local health authorities, including the Centers for Disease Control and Prevention (CDC), in addition to the U.S. Travel Association and the Disney team of health professionals. Promoting health and safety for Guests and Cast Members is a top priority for the hotel.

This is the only hotel that will be reopening. The other Disney hotels at the Disneyland Resort, including the Disneyland Hotel, Disney’s Paradise Pier Hotel and as mentioned, the remainder of Disney’s Grand Californian Hotel & Spa will remain closed and will reopen at a later date.

Guests who are staying at Disney’s Grand Californian Hotel & Spa will note that Disneyland Park and Disney California Adventure will remain closed and will reopen at a later date, pending state and local government approvals. Guests may do some shopping at the Downtown Disney District and beginning November 19, Buena Vista Street at Disney California Adventure will be open as an extension of the Downtown Disney District for shopping and dining.