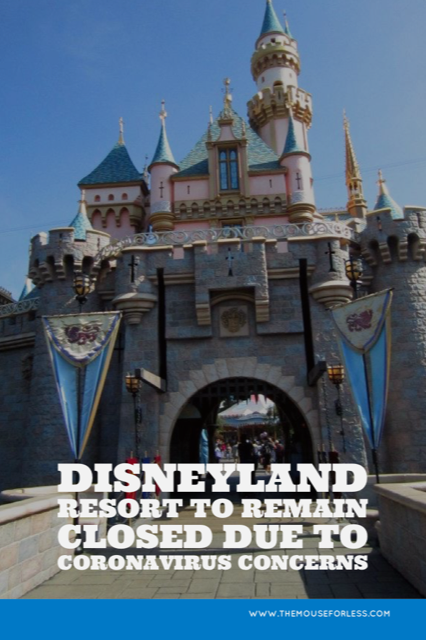 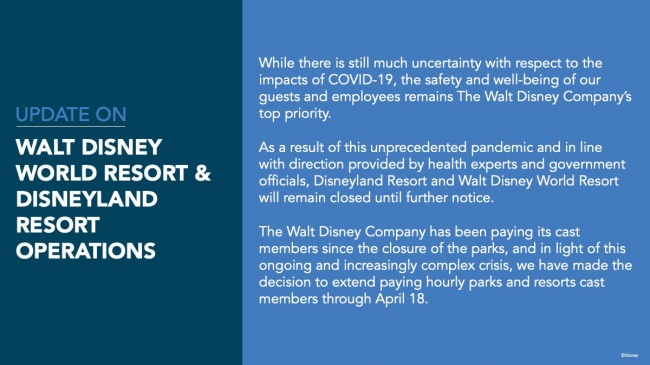 While there is still much uncertainty with respect to the impacts of COVID-19, the safety and well-being of our guests and employees remains The Walt Disney Company’s top priority.

As a result of this unprecedented pandemic and in line with direction provided by health experts and government officials, Walt Disney World Resort will remain closed until further notice.

The Walt Disney Company has been paying its cast members since the closure of the parks, and in light of this ongoing and increasingly complex crisis, we have made the decision to extend paying hourly parks and resorts cast members through April 18.

There are, of course a few questions that pop up about this update. One is the info that the parks are closed until further notice. However, later there is a date listed of April 18 for how long Cast Members will be paid until. While this is just a guess, based off of conjecture, I would assume that this means that the Disneyland Resort will re-evaluate things near that April 18 date and decide if they can reopen or of they need to extend the closure.

So, for those with a trip that was planned for the beginning of April, your vacation dates will now need to be changed. If however, you have a trip scheduled for late April or early May, currently I think it’s still to0 early to say if the parks will officially be open or closed at that point. Everything will depend on how this pandemic spreads or slows in the next few weeks.

We’ll make sure to keep you posted on additional closures or if the park will be reopening as soon as we find out details.