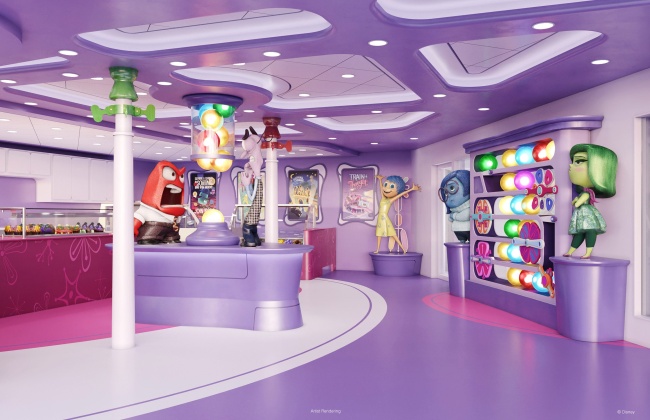 The Disney Wish will officially have her first sailing in July and details are being announced about this beautiful ship. This ship will include nods to favorite Disney Princesses, villains, Marvel heroes and villains, Star Wars characters, and more. Here are some of the new additions announced for this Disney Cruise Line ship.

Inside Out: Joyful Sweets

First thing is the new sweet shop for the ship. Called Inside Out: Joyful Sweets, this dazzling dessert shop is inspired by the Pixar film. This brightly colored area has been designed to resemble the control center inside Riley’s mind. The shop will even feature sculpted figures of the film’s five main characters and glowing Memory Orb light fixtures. It will feature handmade gelato, ice cream, candy and novelty treats for purchase.

The shop will offer nearly 40 flavors of gelato and ice cream. Daily handcrafted gelato specials will include things like peanut butter pretzel and white chocolate raspberry. Whipped cream, fruit compotes and sauces will even be freshly made in-house and there will be a wide selection of tasty toppings. Signature treats inspired by the film will include colorful cupcakes that evoke the five emotions. The flavors will be Joy (lemon), Sadness (blueberry), Disgust (pistachio), Anger (red velvet) and Fear (bubble gum). There will also be chocolate Memory Orbs filled with sweet candy remembrances. Also available will be specialty macarons and cake pops. Plus there will be handcrafted truffles, designer cookies, indulgent brownies and vibrant candy offerings.

Also new for the Disney Wish will be a premium entertainment experience where Guests will be able to join Frozen characters for a summertime picnic. This experience, called Olaf’s Royal Picnic, is specially designed for families with children ages 3 to 12. It will allow Guests to interact with Olaf, Anna, Elsa and Kristoff like never before and delight in live musical performances of songs like “Let It Go,” “Fixer Upper” and “In Summer.”

Under the expert direction of Baroness Dagmar Birgir, who is a lively lady-in-waiting to Queen Anna, castle staff will serve up delicious summer treats and picnic fare for the whole family to enjoy. The hall will be decked out for the summer, including a canopy of colorful flowers. Children will receive an assortment of gifts and keepsakes, including a reversible troll plush and themed picnic blanket. There will also be custom Nordic-style mandolin, which will be needed for a special “Reindeer(s) Are Better Than People” strum-and-sing-along with Kristoff. This show will include royal proclamations, unexpected visitors, and jam-packed surprises.

Guests who have booked a Disney Wish cruise may reserve Olaf’s Royal Picnic prior to their sailing for an additional fee.

The fairytale castle-inspired Grand Hall will serve as both a gathering space and an enchanting theater. It will feature built-in special effects and the first-ever atrium stage on a Disney ship. Guests will be able to experience a royal greeting was they enter the glittering Grand Hall for the first time. Every child will receive their very own wishing wand upon embarkation. They will then use the wand to make the “First Wish” of their vacation during a special boarding celebration.

In addition, during the sailing, families can attend a royal gathering as Disney Princesses descend into the Grand Hall to meet and greet with guests. In addition, the Grand Hall stage will conceal a host of Disney friends during “Who’s Behind the Curtain?” This will be a playful game show where Guests answer questions to reveal the identity of hidden characters. Then, on the final night of every sailing, cruisers will return to the Grand Hall and raise their wands with Fairy Godmother for a farewell show featuring favorite characters, special effects and lively performances. 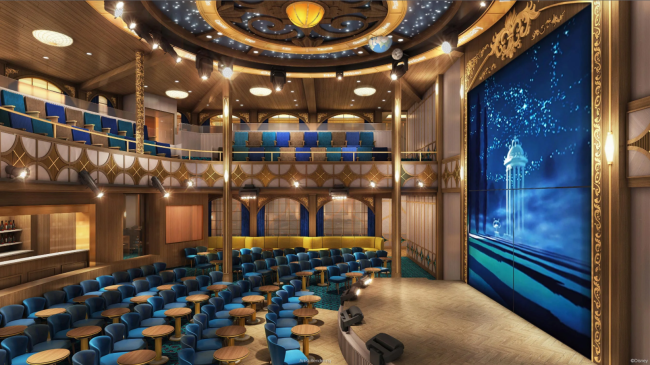 This brand-new entertainment hub, which will be outfitted with a two-story LED screen wall, stage and bar will offer a variety of live shows designed for families. Events will include:

This space is the perfect place for active family play. Hero Zone is a futuristic sports arena where physical activity will blend with imagination. It will feature highly produced show experiences and free-play sports.

Families will be able to test their strength, speed and stamina during the Incredi-Games. This will be a high-energy game show that features an elaborate obstacle course of over-the-top physical challenges, each inspired by the dynamic characters of Pixar’s “The Incredibles.”

In addition, the Guest-favorite Disney Cruise Line experience Jack-Jack’s Incredible Diaper Dash will take place here. It will offer small ones the chance to compete for the title of Diaper Dash Champion. They can speed-crawl across a 20-foot track amid the cheers of their adoring fans.

The Disney Wish will sail its maiden voyage on July 14, followed by a season of three- and four-night cruises to Nassau, Bahamas, and Disney’s private island, Castaway Cay.

0 replies on “More Fun Announced for the Disney Wish”