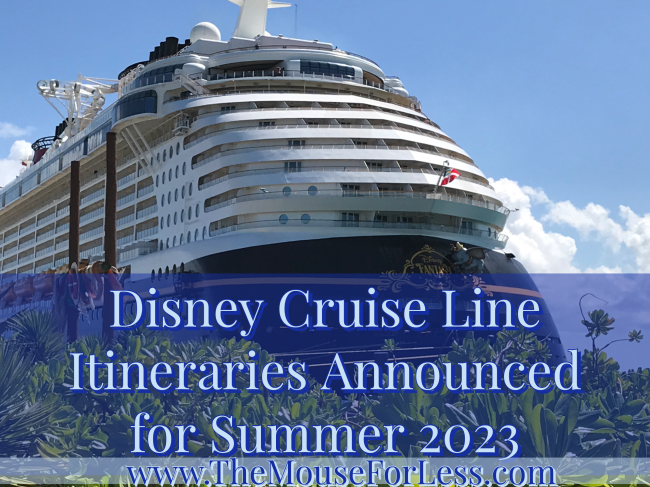 Are you ready to set sail in the summer of 2023? Well, Disney Cruise Line has released its itineraries and Guests will have the option to sail to Europe, Alaska, the Bahamas and Caribbean. Oh and in a huge change, for the first time ever, the Disney Dream will be heading east to Europe!

The Disney Dream will sail anywhere from four to 11 nights, including a first-ever seven-night sailing to the Greek Isles with stops in the popular ports of Santorini and Mykonos.

Late summer/early fall departures of the Disney Dream from Southampton will feature cruises to destinations including Spain, France, the British Isles, Norway and Iceland. New ports of call include La Rochelle, France and two new ports in Norway – Skjolden and Sandnes.

The Disney Wonder will once again sail to Alaska. Guests will be able to choose from five-, seven- and nine-night sailings from Vancouver, Canada. Beginning in May, sail to ports like Ketchikan and Skagway. In addition, three Alaskan itineraries call at Icy Strait Point which is home to a coastal rainforest, wilderness tours and ziplining above the treetops.

For its first full summer of sailing, the Disney Wish will homeport in Port Canaveral The ship will set sail on three- and four-night Bahamas cruises to Nassau and Disney’s private island, Castaway Cay.

Port Canaveral will also be the departure point for the Disney Fantasy. These sailings will range in length from five to ten nights. In addition to seven-night cruises to popular ports in the eastern and western Caribbean, Guests will also be able to experience a five-night Bahamian sailing with back-to-back calls at Castaway Cay. There will also be a 10-night southern Caribbean itinerary to the islands of Aruba and Bonaire and an eight-night cruise featuring two days in Bermuda.

When Can I Book?

Guests who are previous Disney Cruise Line sailers can book early. General booking opens to all beginning on Monday, May 9.

Here are when other Guests can book: