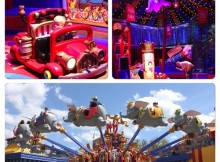 Walt Disney World
Run ragged and pressured to endure a blistering pace, many seniors just concentrate on surviving the Magic Kingdom than enjoying it. The Magic Kingdom has much to offer and
Read More