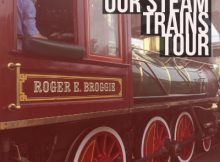 Disney News
A couple of additional refurbishments have been announced for the late summer/early fall time period.  They include: The Walt Disney World Railroad at the Magic Kingdom will be
Read More