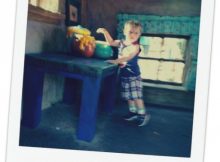 Theme Parks at Walt Disney World
Touring a Disney Park can be exhausting. As adults after a full day of riding rides and walking up to 15,000 steps the last thing we want to
Read More
Featured Article
By Debbie Boehm April 22nd marks 15 years since Disney’s Animal Kingdom opened its gates for the first time.  As a Cast Member of The Disney Store in
Read More